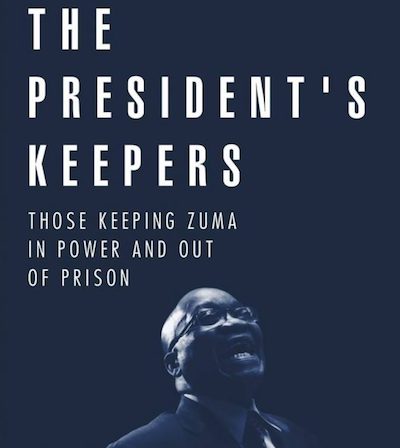 The South African Revenue Service, South Africa's state tax agency, confirmed on 19th December that it is taking legal action against investigative journalist Jacques Pauw. SARS has accused Pauw of publishing confidential tax information in his book The President's Keepers: Those Keeping Zuma in Power and Out of Prison. The State Security Agency has sent 'cease and desist' orders to Pauw and his publisher, though the book has not been withdrawn from sale. In fact, it's sales have increased dramatically since the controversy, selling more than 200,000 copies.

There have been numerous graft allegations against Zuma (including 783 cases filed against him before he became President). Pauw's book is the first to meticulously expose the network of corruption surrounding his government, and the legal action by SARS would seem to validate the book's claims. As Pauw writes: "Under his rule, South Africa has become a two-government country. There is an elected government, and there is a shadow government - a state within the state."