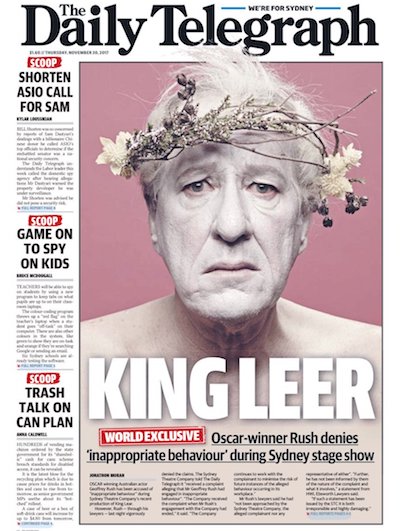 Actor Geoffrey Rush is suing The Daily Telegraph for libel. The newspaper, published in Sydney, claimed that Rush "has been accused of "inappropriate behaviour" during Sydney Theatre Company's recent production of King Lear." Its 30th November front page featured the banner headline "KING LEER", and a folo story appeared on the next day's front page. Rush also complained about a poster advertising the paper's coverage of the scandal.

At a press conference in Melbourne yesterday, Rush said: "I have filed defamation proceedings against The Daily Telegraph in the Federal Court of Australia. It is an action I am taking in order to redress the slurs, innuendo, and hyperbole that they have created around my standing in the entertainment industry and in the greater community. The Daily Telegraph has made false, pejorative, and demeaning claims, splattering them with unrelenting bombast on its front pages."

His statement itself seems rather hyperbolic, given that the theatre has acknowledged receiving a complaint against him and the newspaper did not include any details of the allegation. (Ironically, his statement has been widely misquoted in news reports following the press conference.)