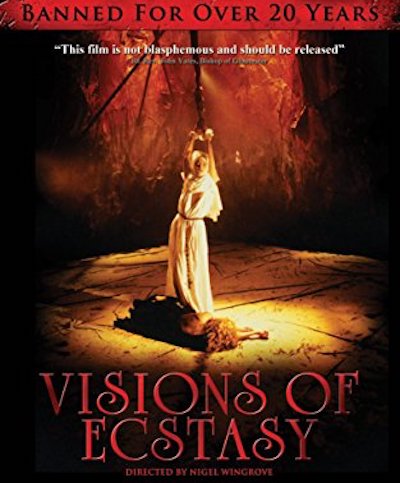 Nigel Wingrove's short film Visions of Ecstasy was banned by the British Board of Film Classification in 1989, and is the only film to be banned in the UK on the grounds of blasphemy. Wingrove lost all of his subsequent appeals against the ban, both in the UK and the European Union.

However, the UK's blasphemy law was repealed in 2008, making Visions of Ecstasy legally available for the first time (along with James Kirkup's poem The Love that Dares to Speak its Name). It was released on DVD in 2012 by Wingrove's distribution company, Redemption, along with a booklet (Finding Ecstasy on the Road to Redemption) written by the director.
Categories: blasphemy, censorship, video reviews
continued...