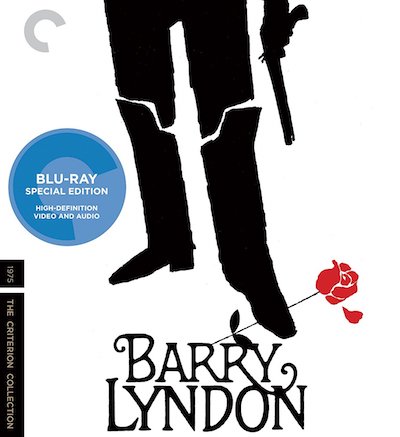 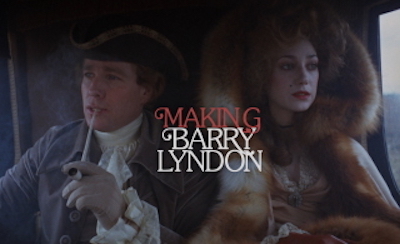 Stanley Kubrick's Barry Lyndon was released this week on blu-ray and DVD by the Criterion Collection. Criterion titles are almost always superb, and Barry Lyndon is no exception: their new blu-ray is the film's definitive release.

Barry Lyndon has previously been available on Warner laserdisc and VHS, in its original 1.66:1 theatrical aspect ratio and mono soundtrack. It was also released in this format on DVD in 1999, as part of The Stanley Kubrick Collection. However, when it was remastered in 2001, the soundtrack was remixed to 5.1 surround sound, and this artificially enhanced version reappeared on subsequent DVD releases.

When the film was released on Warner blu-ray in 2011, its aspect ratio was cropped to 1.77:1 (the HD-TV format). Leon Vitali, one of Kubrick's assistants, defended the release by claiming that Barry Lyndon's aspect ratio had always been 1.77:1, and it had never been available in 1.66:1 (despite thirty-five years of theatrical, laserdisc, VHS, and DVD releases in 1.66:1). Even when a letter by Kubrick stating that it "was photographed in 1-1.66 aspect ratio" was discovered, Vitali maintained that Kubrick preferred 1.77:1.

Thankfully, the Criterion blu-ray returns the film to its correct 1.66:1 ratio, and its original mono soundtrack has also been restored. This meticulous attention to detail is unsurprising, as Criterion's Lolita, Dr Strangelove, and 2001: A Space Odyssey laserdisc transfers were supervised by Kubrick himself. They have also released excellent blu-ray editions of The Killing (and Killer's Kiss) and Dr Strangelove.

Criterion's Barry Lyndon blu-ray also features supplements covering various aspects of the film, notably the new documentary Making Barry Lyndon, which features extracts from Michel Ciment's interview with Kubrick, as broadcast on A Voix Nue. The documentary also includes the incredible (in both senses) story that Kubrick telephoned the Queen from the set of Barry Lyndon to ask her about royal etiquette!

Ciment (author of Kubrick: The Definitive Edition), and Christopher Frayling (author of Ken Adam: The Art of Production Design, Ken Adam Designs the Movies, and The 2001 File) are interviewed in other documentaries on the blu-ray. (Criterion has produced an entire disc's worth of extra features, whereas previous releases had no supplements apart from the trailer.)
Categories: Stanley Kubrick, video reviews
continued...