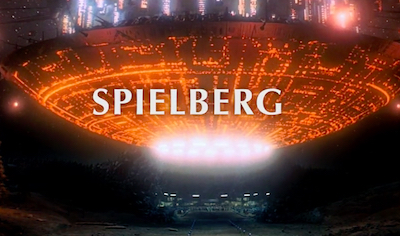 Spielberg, Susan Lacy's feature-length documentary on the career of director Steven Spielberg, premiered on HBO on 7th October. The film is similar to Stanley Kubrick: A Life in Pictures, Jan Harlan's profile of Kubrick: both documentaries are more than two hours long, and both benefit from extensive access to their subjects' archives.

Spielberg begins with Jaws, which is not only (arguably) Spielberg's greatest film but also the movie that (for better or worse) set the wide-release template for summer blockbusters that Hollywood has depended on ever since. Lacy then rewinds to Spielberg's short 8mm films, his television work for Universal, and his feature films in broadly chronological order.

The documentary features interviews with Spielberg himself, his fellow directors (Martin Scorsese, Francis Coppola, and George Lucas), and the leading actors from practically all of his films. In fact, there are so many A-list contributors that some of them (such as Harrison Ford and Tom Cruise) barely have time to say anything. Even Spielberg's mother (who died shortly afterwards) and his centenarian father are included.

Spielberg has made some of Hollywood's most entertaining and acclaimed films, including Close Encounters of the Third Kind, Raiders of the Lost Ark, ET, Schindler's List, Jurassic Park, and Saving Private Ryan, and these are explored in some depth in the documentary. Despite the long running time, interesting late-career films such as AI, Minority Report, and Lincoln are relegated to brief clips without much (or any) analysis.

As an authorised retrospective, the documentary is largely positive in its assessment of Spielberg's career, though it accomplishes this by simply ignoring the less successful films, with the exception of 1941. There are a couple of dissenting voices among the talking heads, notably the screenwriter of Empire of the Sun, who criticises Spielberg's sentimental tendencies. There's a discussion about whether Spielberg really had the chutzpah to sneak into a vacant Universal office, but Spielberg himself is not asked to confirm or deny the rumour. (He told the story, unchallenged, in the documentary Spielberg on Spielberg and book Spielberg: A Retrospective, both by Richard Schickel.)
Categories: film reviews, media
continued...