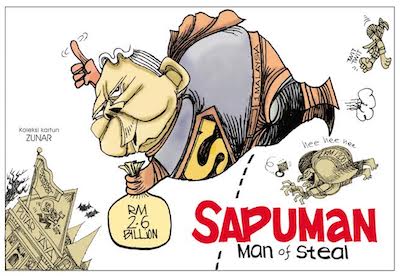 Another book of cartoons by Zulkifli Anwar Ulhaque (known as Zunar) has been banned by the Malaysian government. Sapuman: Man of Steal, published in 2015, satirises Malaysia's Prime Minister Najib Razak and his corrupt business transactions. (In 2015, The Wall Street Journal revealed that $681 million had been transferred from the state-owned company 1MDB to Najib's personal bank account.)

Zunar's book launches and exhibitions are raided by police on a fairly regular basis. An exhibition of his work was forced to close last year. Three of his older books were banned in 2015: Pirates of the Carry-BN, Komplot Penjarakan Anwar, and Ros in Kangkong Land.
Categories: book reviews, censorship, politics
continued...