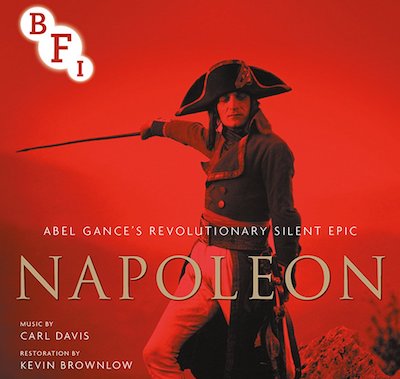 Last year, the BFI released Abel Gance's Napoleon on DVD and blu-ray. The BFI edition features a 332-minute version of Gance's silent masterpiece, meticulously restored by Kevin Brownlow, with a score composed by Carl Davis. (The bonus features include an interview with Brownlow, his BBC documentary on Gance's films, and a booklet with an extract from his book on the film.) Napoleon famously climaxes with a triptych sequence, and each of the three panels is included on a separate disc, so the triptych effect can be recreated (if you have three DVD/blu-ray players and three TVs side-by-side).

This UK release of Napoleon is the first time Brownlow's restoration has been released on any video format. Even theatrical screenings are rare events, partially due to the logistics of the triptych finale though also because of an excessive copyright claim by Francis Ford Coppola. Coppola's father composed a score to accompany a truncated version of the film, and this version has previously been released by MCA in the US on VHS (in 1989) and by Universal in Australia on DVD (2003). Coppola's version is almost 100 minutes shorter than Brownlow's restoration, though until the BFI's release, Coppola's was the only version available.
Categories: video reviews
continued...