Mapplethorpe: Look At The Pictures 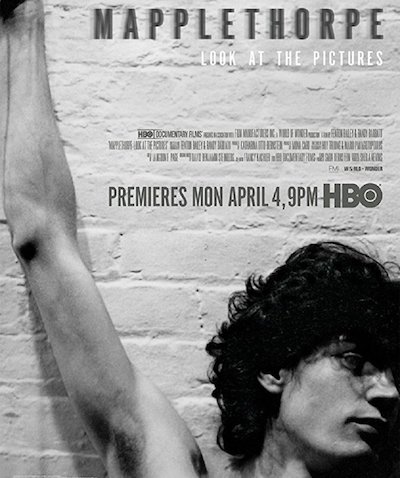 Mapplethorpe: Look At The Pictures is the first feature-length documentary on the life and work of photographer Robert Mapplethorpe, who died in 1989. The film is an HBO production, and was first broadcast on 4th April 2016. (In the UK, it was shown on BBC2, as part of the Imagine... series, on 29th July 2017.) Its directors, Fenton Bailey and Randy Barbato, previously collaborated on the documentary Inside Deep Throat.

The film's subtitle is taken from a speech on the Senate floor made by Jesse Helms in 1989: "I want Senators to come over here, if they have any doubt, and look at the pictures." Helms was campaigning against National Endowment for the Arts funding for exhibitions by Mapplethorpe and Andres Serrano, amongst others, and he showed Mapplethorpe's Man In Polyester Suit (1980) and Serrano's Piss Christ (1987) in the Senate. When the posthumous Mapplethorpe retrospective The Perfect Moment opened at the Contemporary Arts Center in Cincinnati later that year, the Center's director was charged with exhibiting obscene images, though he was ultimately acquitted.

The makers of Look At The Pictures were given complete access to the Robert Mapplethorpe Foundation's archive. Consequently, the fascinating documentary includes hundreds of previously unseen photographs by Mapplethorpe, and audio extracts from interviews with him. He tells one interviewer: "The work dealing with sexuality is very directly related to my own experiences. It was an area that hadn't been explored in contemporary art, and so it's an area that interested me in terms of making my statement." Many of Mapplethorpe's surviving friends, lovers, and family members participated in the film, with the notable exception of Patti Smith.

Look At The Pictures misrepresents the Cincinnati case by mistakenly claiming that Joe, NYC was included in the list of photographs being prosecuted. More contentiously, the film omits any mention of Jessie McBride or Rosie, which were presumably deemed too sensitive to include in the documentary. These two images were included in a Channel 4 documentary, Damned In The USA, broadcast on 27th September 1991. Rosie, from Mapplethorpe's book Certain People (1985), is especially controversial, and is not included in later Mapplethorpe monographs; it was removed from a Hayward Gallery exhibition in London in 1996 on police advice.
Categories: censorship, film reviews, media
continued...