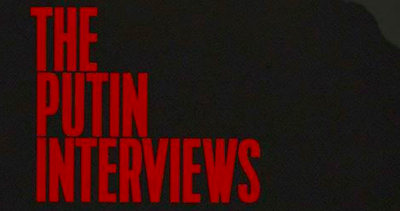 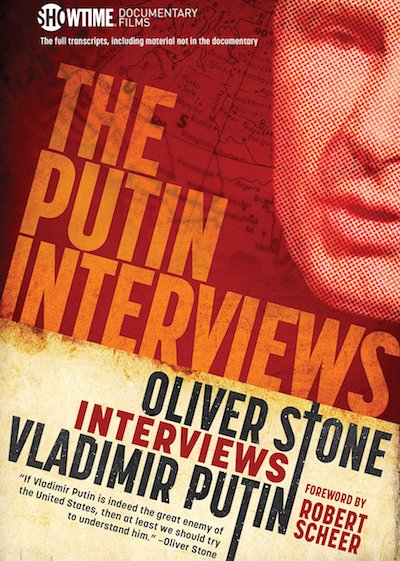 Oliver Stone's documentary The Putin Interviews, broadcast on Showtime over four consecutive nights from 12th to 15th June, is a four-hour profile of Russian President Vladimir Putin. The interviews, which ran for a total of twenty hours, took place over the past two years. The four episodes, and an accompanying book of transcripts, are significant thanks to Stone's extensive access to Putin, though they are far from the probing encounter we might have expected. Tellingly, at the end of the book, Stone tells Putin: "I'm proud of the film. You got to tell your side of the story and that's all I can do."

The book contains longer versions of the interviews, though it can't capture Putin's body language: he sighs heavily and smiles thinly throughout the programme, and in one episode he turns to wink at the camera. ("STONE/PUTIN" on the book's spine positions it as a successor to Frost/Nixon, though it feels more like Conversations With Thaksin.) The book's main asset is that it includes footnotes, citing reputable and neutral sources, that fact-check the interviews. But the footnotes focus on statistical details rather than the wider narrative; for example, verifying that "Putin is correct that well over 90% of the Crimeans who went to the polls voted to leave Ukraine and join Russia" yet ignoring the illegality of the referendum itself.

In the documentary's most surreal moment, Stone and Putin watch a DVD of Stanley Kubrick's Cold War satire Dr Strangelove. Putin is clearly unimpressed, and gives a fairly bland assessment: "There are certain things in this film that indeed make us think, despite the fact that everything you see on screen is make believe. He foresaw some issues even from a technical point of view, things that make us think about real threats that exist."

Throughout most of the programme, Stone's questions reflect his opposition to America's hawkish foreign policies. Putin plays up to this, by criticising American interventionism, which provides Stone with validation for his own view of American neoconservatism. At one point, Putin declines to blame America for cyberattacks on Russian banks - "You are disappointed because the U.S. failed to do something?" - and Stone displays a rare moment of skepticism: "You're obviously sitting on some information. I understand why you may not want to make it public."

Too often, Putin's questionable denials of his own foreign interventions go unchallenged. When asked about Russia's hacking of the Democratic National Committee, Putin says, "Unlike many of our partners, we never interfere with the domestic affairs of other countries." Instead of asking any follow-up questions, Stone simply ends the interview session. Similarly, the issue of Crimea is presented from an entirely pro-Russian perspective: Putin says, "We were not the ones to annex Crimea. The citizens of Crimea decided to join Russia", accompanied by propagandist footage of a young girl hugging a soldier.

Only in the fourth and final episode does Stone begin to challenge Putin. (In his prologue to the book of transcripts, Robert Scheer writes: "In that last session, Stone strenuously pushes Putin".) The episode begins with their most recent interview, recorded earlier this year, in which they return to the subject of Russia's DNC hacking. Stone says of Putin: "You look like a fox who just got out of the hen house", to which Putin replies: "There were no hens in the hen house, unfortunately."

Towards the end of the last episode, Stone raises the issue of Putin's extended time in office, to which Putin offers a standard justification: "Our goal is to reinforce our country." In his reply, Stone finally criticises his interviewee directly: "That is a dangerous argument, because it works both ways. Those who abuse power always say it's a question of survival."
Categories: book reviews, media, politics
continued...