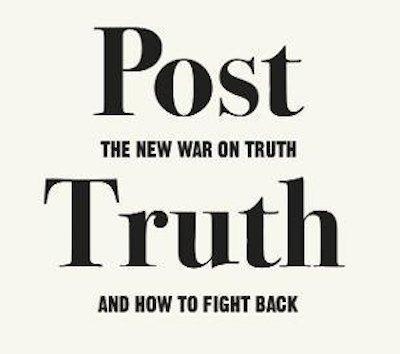 After the UK referendum on EU membership and Donald Trump's US presidential election victory, several books have discussed the so-called 'post-truth' era. In Post-Truth: The New War On Truth & How To Fight Back, Matthew d'Ancona credits Steve Tesich with coining the term in 1992 ("we, as a free people, have freely decided that we want to live in some post-truth world"), though it was only after Brexit and Trump that post-truth became a buzzword: "2016 was the year that definitively launched the era of 'Post-Truth'."

Of course, d'Ancona highlights Vote Leave's campaign pledge ("the assertion - emblazoned on the side of the Leave battle bus - that Brexit would yield a £350 million weekly top-up for the cash-strapped NHS") and explains its mendacity: "To borrow a distinction often made by Trump's supporters, it was evidently a mistake to take the Leave campaign literally rather than seriously." He also itemises some of Trump's lies and exaggerations, which were labelled "truthful hyperbole" by Tony Schwartz (ghost writer of The Art Of The Deal) and defended as "alternative facts" by Kellyanne Conway.

Explaining the origins of post-truth, d'Ancona notes the commercial value in sensational falsehoods: "Post-Truth sells, too. Those whom the Columbia University professor Tim Wu has called the 'attention merchants' compete for our time - and market it as a hugely valuable product." He also cites the ideological fragmentation of media and audiences: "The consequence is that opinions tend to be reinforced and falsehoods unchallenged. We languish in the so-called 'filter bubble'."

The book also reminds us of pre-Trump, post-truth presidential soundbites, from "I am not a crook" (Richard Nixon) to "I did not have sexual relations with that woman" (Bill Clinton). This history, d'Ancona argues, has contributed to a public distrust of authority, a situation which was then exploited by partisan media: "If institutional failure has eroded the primacy of truth, so too has the multi-billion-dollar industry of misinformation," leading to the proliferation of 'fake news' online.
Categories: book reviews, Donald Trump, media, politics
continued...