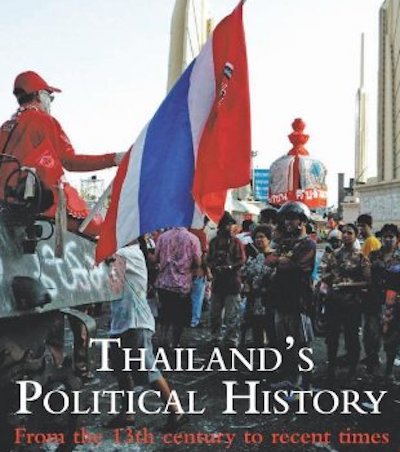 The second edition of Thailand's Political History, by BJ Terwiel, was published in 2011 with a new subtitle (From The 13th Century To Recent Times). This edition contains new chapters on Thailand's political origins (the Sukhothai era) and contemporary events (the PAD protests, the nullification of the 2006 election, the 2006 coup, the disqualification of Prime Minister Samak, the dissolutions of TRT and the PPP, the UDD riots, the red-shirt protests, and the 2010 military massacre).

Terwiel, who has been writing about Thai history for forty years, takes a refreshingly skeptical view of the nationalistic accounts of early Thai history, which he calls "national myths." He debunks some of these legends in his opening chapter: "Some of these national scenarios were spectacular indeed and since they were flattering and generated pride in their nation they found their way into the standard history books and became part of national propaganda."

For example, Terwiel compares six different accounts of King Naresuan's elephant duel. While the objective truth remains lost in the mists of time, emphasising that these events are open to multiple interpretations is significant in itself: "It is doubtful whether anyone will unravel the details of this battle in a decisive way. Suffice to say that The Royal Chronicle version, which has had a monopoly in Thai history writing, is only one version among many."

The book's priorities are occasionally questionable - Thaksin Shinawatra's first term as Prime Minister is covered in only two paragraphs, followed by six paragraphs devoted to the 2004 tsunami -
and Terwiel's writing style is sometimes a bit clunky, especially in the new chapters. But the content is always fascinating. For instance, Terwiel hints that King Rama VI had "a decided preference for male company" and was "a confirmed bachelor who relaxed only within a circle of intimate male friends who readily accepted him."

What sets this apart from other histories of Thailand is its comprehensive treatment of the yellow-shirt and red-shirt protest movements. Terwiel provides a detailed chronology of the period from 2007 to 2010, and his account has the necessary objectivity missing from pro-yellow (The Simple Truth) and pro-red (A Kingdom In Crisis) interpretations. The book is also well illustrated, and has detailed footnotes and an extensive bibliography.
Categories: book reviews, politics, Thailand, Thaksin Shinawatra
continued...