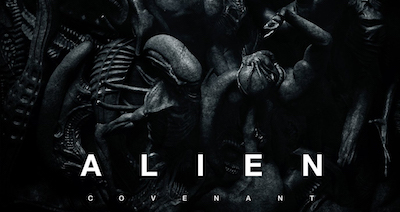 Alien: Covenant is Ridley Scott's sequel to Prometheus, and both films are prequels to Scott's original classic, Alien. After a prologue featuring Guy Pearce minus his old-age Prometheus make-up, Covenant has more in common with the original Alien, to the extent that it feels like a retread of the earlier film. (It also has references to Scott's Blade Runner, including the line "That's the spirit!" used in similar circumstances, and alien POV shots inspired by It Came From Outer Space.)

Covenant's action takes place several years before Alien's storyline, though Alien really needs to be seen first, not for narrative reasons but to fully appreciate the original 'chestburster' sequence. In that respect, Prometheus and Covenant are similar to the (inferior) Star Wars prequels: they provide convoluted and largely unnecessary backstories, they depict 'older' worlds that paradoxically seem more advanced, and they disclose the plot twists in the earlier films.

Covenant's final revelation, involving Michael Fassbender's two characters, was far too predictable. (Revealing it to the audience sooner would have led to more Hitchcockian suspense.) Covenant benefits from Scott's typically superb production design and cinematography, though ultimately it's Alien without the tension or (Fassbender excluded) the depth of character.
Categories: film reviews
continued...