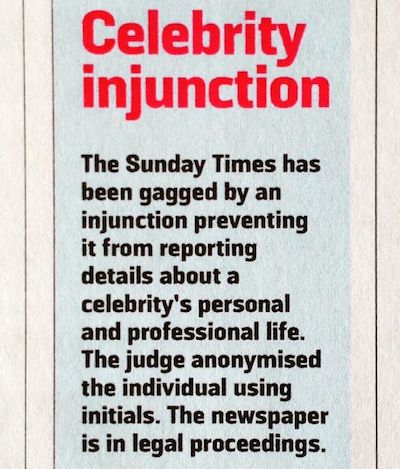 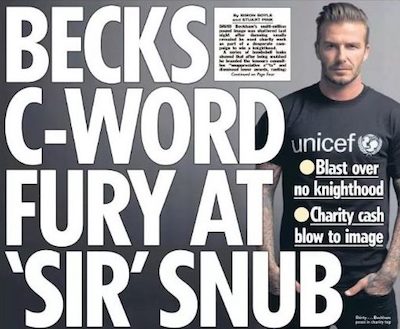 Beckham's emails were among thousands leaked to the German news magazine Der Spiegel earlier last year, and Beckham's publicist applied for an injunction after The Sunday Times planned to publish them. Like other anonymised injunctions (such as those relating to PJS, NEJ, RA, and D), the restriction applied only in England and Wales. Unusually, the injunction was granted solely against The Sunday Times, enabling The Sun (despite being owned by the same company) to publish the story on 4th February.

On its front page, under the banner headline "BECKS C-WORD FURY AT 'SIR' SNUB", The Sun wrote that Beckham had criticised the committee recommending new year's honours as "a bunch of cunts" and "unappreciative cunts". This was then reported by other UK and European news websites later that day. The terms of the injunction against The Sunday Times were subsequently relaxed, allowing it to report information already in the public domain.
Categories: censorship, media, the c-word
continued...