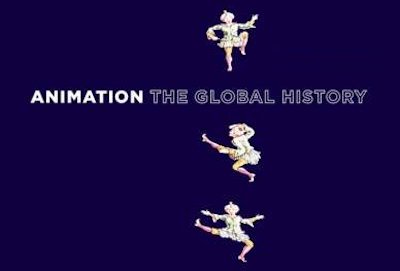 Animation: The Global History, by Maureen Furniss, is described by its publisher (Thames & Hudson) as "THE FIRST COMPREHENSIVE HISTORY OF INTERNATIONAL ANIMATION", though it could more accurately be called the most comprehensive single-volume history of all types of animation. The UK edition was released this month, though it was published in the US last year as A New History Of Animation.

Film and television cartoons are featured in considerable depth, though the main strength of this ambitious and impressive book is its coverage of peripheral forms of animation such as computer games, advertising, music videos, and even performance art. Furniss also provides cultural context by linking trends in animation to art and design movements, and the book is visually appealing, with around 400 colour illustrations.

Furniss inevitably focusses on the American, European, and Japanese animation industries, though there are also sections on China and Russia. Unfortunately, Australia, South Korea, India, South America, and Africa are all lumped into a single chapter. There are footnotes and a glossary, though no bibliography.

The book was written more than twenty years after Giannalberto Bendazzi's Cartoons: 100 Years Of Cinema Animation (1994), which focusses largely on animated films. Bendazzi's book has less coverage of TV animation, and it pre-dates the computer-generated era and the Western popularity of Japanese anime. Furniss, of course, discusses these extensively, though Bendazzi's book remains the definitive study of cinematic animation, unrivalled for its encyclopedic coverage of more than seventy countries.

Maurice Horn's World Encyclopedia Of Cartoons (1980) contains biographies of hundreds of animators, and Stephen Cavalier's The World History Of Animation (2011) features capsule reviews of animated films from around the world. The Anime Encyclopedia and Anime: A History provide the best coverage of Japanese cartoons, and Moving Animation is the first history of computer animation. Bendazzi's three-volume Animation: A World History was published in 2015.
Categories: book reviews
continued...