Tears Of A Clown 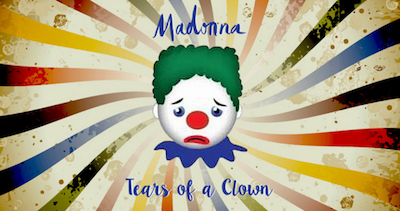 Madonna's Tears Of A Clown cabaret show debuted in Melbourne earlier this year, and she performed her second Tears Of A Clown concert (wearing a less gothic clown costume) yesterday in Miami. (It was also streamed online via Facebook Live.) Both shows began with a cover version of Send In The Clowns and ended with a ukulele version of Holiday, her traditional encore, though in other respects the two performances were entirely different.

The first show was rather maudlin, while the second was much more upbeat. A revised set list, with ballads replaced by Beautiful Stranger, American Life, and Express Yourself, gave the second show much more energy than the first. Despite the Tears Of A Clown title, the second version was more angry than sad, and the melancholic introspection of the first show was gone. Instead, Madonna admonished the audience (for crowding the stage) and criticised Donald Trump (during a cover version of Britney Spears' Toxic).

Yesterday's show also seemed more rehearsed and choreographed than the first. The clown jokes were as corny as before, though there was some comic timing instead of the first show's awkward silences. The only misfire came when Madonna gave $100 bills to members of the crowd, seemingly for no reason. The audience (who had paid $5,000 each for this charity event) was fairly quiet, and Madonna complained: "There's no excitement in this room!" The set list was: Send In The Clowns, Like It Or Not, Toxic, I'm So Stupid, Beautiful Stranger, Easy Ride, American Life, Don't Tell Me, Express Yourself, and Holiday.
Categories: Madonna
continued...