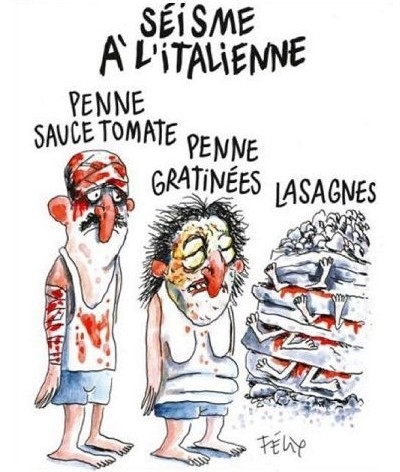 Charlie Hebdo is being sued by the Italian town of Amatrice, after the French newspaper published a cartoon by Felix Moureau mocking the victims of an earthquake that decimated the town. A lawsuit against the newspaper has been filed on behalf of the town council. (The newspaper has previously been sued for blasphemy, though that case was ultimately dismissed.)

230 residents of Amatrice were killed in last month's earthquake. On 31st August, Charlie Hebdo published a cartoon comparing the victims to pasta dishes. The cartoon was criticised as deeply insensitive, and Charlie Hebdo faced similar criticism last year when it printed cartoons of Alan Kurdi. The newspaper first caused controversy in 2006, with its front-page cartoon of Mohammed.

A dozen Charlie Hebdo staff were killed in a terrorist attack last January, and the newspaper responded defiantly with another front-page Mohammed caricature. Its offices were firebombed in 2011, after it published a Charia Hebdo issue guest-edited by Mohammed. In 2012, it printed a cartoon of Mohammed naked. In 2013, it produced a comic-strip biography of Mohammed titled La Vie De Mahomet (parts 1 and 2), followed by an expanded edition. In 2014, it published a front-page cartoon of Mohammed being beheaded by an Islamic State terrorist.
Categories: censorship, media
continued...