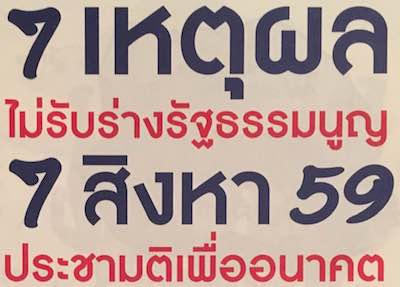 Three members of the New Democracy Movement were arrested on Sunday and accused of violating the Referendum Act. Article 61 of the Act states that "anyone who publishes text, images or sound... that is either untruthful, harsh, offensive, rude, inciting or threatening, with the intention that voters will either not exercise their right to vote, or vote in a certain way" will face up to ten years in jail.

The New Democracy Movement is an anti-coup organisation that has been campaigning against the military's proposed constitution. They have been treading a legal tightrope by distributing t-shirts calling for people to 'vote no' in the referendum to be held on 7th August.

The NDM members were arrested in Ratchaburi after police found copies of anti-charter booklets in their car. Election Commissioner Somchai Srisuthiyakorn has said that one of the NDM's booklets (a fold-out poster listing seven reasons to vote no) is in violation of the Act.

A journalist from Prachatai who was travelling with the NDM members was also arrested. They were all detained in custody on Sunday night, and granted bail yesterday. Police searched Prachatai's office today.