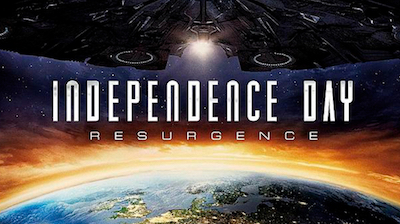 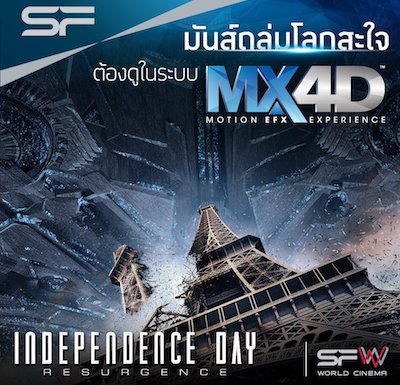 Independence Day: Resurgence, Roland Emmerich's sequel to Independence Day, is another of the director's SF/disaster movies, though it lacks the wow factor of the original film's White House destruction sequence. As Jeff Goldblum says in Resurgence: "They like to get the landmarks." (Goldblum's role is similar to his character in Jurassic Park, and an accountant played by Nicolas Wright is clearly modelled on the lawyer from that film.)

Resurgence is screening in Bangkok in the MX4D format, which is a similar technology to South Korea's 4DX. Like 4DX, MX4D features motion-controlled seats, flashing lights, water vapour, wind, smoke, etc. The main difference is that MX4D (which was developed in the United States) has an additional motorised effect that pokes the underside of the seats.

MX4D is currently only available in screen 10 at SF World. Like Cinerama, 3D, HFR, Dolby Atmos, and Aroma-Scope (and ScreenX at EmQuartier's CineArt, screen 2), it's a gimmick to lure audiences back to the cinema.
Categories: film reviews
continued...