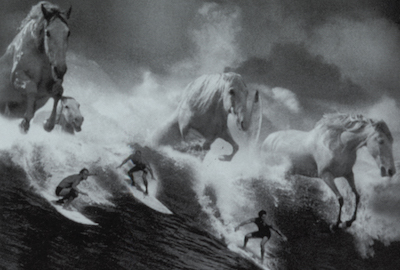 Game Changers: The Evolution Of Advertising, edited by Peter Russell and Senta Slingerland, features 150 advertising campaigns from (approximately) the past sixty years. Publisher Taschen calls it "the first definitive history of how advertising got from there to here, and where it’s going next." It's not a definitive history, though it is an excellent survey of classic ad campaigns. It was published to coincide with an exhibition in 2013 organised by the Cannes Lions advertising festival.

Among the selected television commercials, billboard posters, and display ads are examples of effective slogans (such as Nike's "Just Do It" from 1988) and iconic images (including the conceptual Silk Cut campaign that began in 1984). There are also political broadcasts, from the nuclear apocalypse of Lyndon Johnson's Daisy Girl (1964) to Ronald Reagan's optimistic Prouder, Stronger, Better (1984; also known as "Morning in America").

Global campaigns, like Coca-Cola's Hilltop (1971) featuring the jingle "I'd Like to Buy the World a Coke", are included, alongside recent viral marketing such as Cadbury's Gorilla (2007). There are also commercials made by film directors such as Ridley Scott (Apple's 1984) and Jonathan Glazer (the acclaimed 1999 Surfer ad for Guinness).
Categories: art exhibitions, book reviews, media
continued...