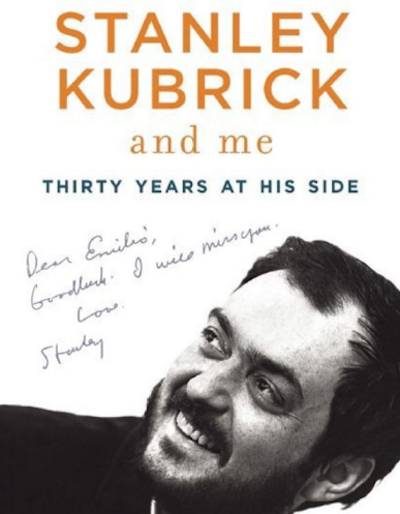 Stanley Kubrick & Me, the autobiography of Kubrick's personal assistant, Emilio D'Alessandro, was published in Italian in 2012. An English translation, Stanley Kubrick & Me: Thirty Years At His Side, was released last month. The memoir was written by Filippo Ulivieri, and translated by Simon Marsh.

D'Alessandro, an Italian driver living in London, first met Kubrick in 1971, and eventually became his most trusted assistant: "I'd been hired as a driver, but in fifteen years I'd become an electrician, plumber, vet, gardener, carpenter, and builder. Every day there was something new. I spent less and less of my life away from Stanley."

As Ian Watson wrote in his essay Plumbing Stanley Kubrick (2000), D'Alessandro was a central figure in Kubrick's life: "Emilio became much more than merely a driver. Short, dark, and wiry, he had kept practical matters ticking over at the manor house for many years, playing a major role in trying to steer catastrophes back into mere mishaps."

Kubrick's production operation "consisted of dozens and dozens of cogs: some small, some large, but all of them important. Each one was a necessary working part of the engine that was Stanley Kubrick." D'Alessandro was one of the largest cogs in that machine, and his relationship with Kubrick was closer and longer than that of any other staff member (and arguably closer than anyone outside Kubrick's family).

D'Alessandro was Kubrick's driver and personal assistant for almost thirty years. (D'Alessandro was a former racing driver, though Kubrick's driving was somewhat less accomplished: "Whenever he drove me somewhere, I felt I was staring death in the face.") He dealt with Kubrick's personal possessions, his correspondence, and, above all, his beloved pets: "Stanley's love for animals was limitless, bordering on the preposterous, and was extended unconditionally to all living creatures."

Ulivieri writes in his afterword: "If you asked, and I did want to ask, any random day spent with Kubrick would have been enough to fill a hundred pages." His book contains new Kubrick anecdotes on every page, and it reveals more of Kubrick's character than any previous book on the director.

D'Alessandro was the last person to see Kubrick before he died, during the post-production of Eyes Wide Shut: "He had reached the absolute limit of physical and mental exhaustion". The book's final chapters deal with Kubrick's funeral and D'Alessandro's return to Italy. (D'Alessandro was interviewed at his home in Cassino for S Is For Stanley, a feature-length documentary inspired by Stanley & Me.)

D'Alessandro and Ulivieri allow us, for the first time, to see the real Kubrick: "In the collective imagination, Stanley Kubrick was a kind of ogre. A misanthrope, who lived alone in his castle, isolated from the world. Stanley was quite the opposite: he was an altruistic man, capable of generosity without the need for recognition, an artist who valued his privacy because it allowed him to devote himself to what he cared about most of all: his family, his animals, and the cinema."

The Italian edition has a more comprehensive index, though in other respects the English version is superior. It has more colour illustrations and longer captions than the Italian edition, and the photographs have been enhanced. (Kubrick completists will want to have both editions, as they each include a different selection of location photographs taken by Kubrick at Mentmore Towers. An Italian digital edition, Stanley Kubrick & Me: 30 Anni Al Suo Fianco, includes even more photographs.)

Reading between the lines, D'Alessandro seems somewhat estranged from Kubrick's estate. "Out of respect for Stanley," he declined to attend the European premiere of Eyes Wide Shut. He was not interviewed for the official documentary A Life In Pictures (Jan Harlan, 2001). His appearance in the documentary The Last Movie (Paul Joyce, 1999) was cut out when it was released on DVD. Anthony Frewin and Leon Vitali (two former employees) have become de facto spokesmen for Kubrick's estate, though D'Alessandro's book contains no mention of Frewin and only a passing reference to "an actor named Leon Vitali".

Although there are plenty of books on Kubrick's films, and a couple of unauthorised biographies, there are very few memoirs of Kubrick by those who knew him well. Frederic Raphael's Eyes Wide Open is incredibly self-serving. ("S.K.: Caesar's Gallic Wars... Have you read it? F.R.: Stanley, I read it in Latin when I was nine years old.") Michael Herr's Kubrick is a concise and affectionate tribute. ("I reminded him that he hadn't turned the computers off. "They like to be left on," he said ironically, factually, tenderly.") But Stanley Kubrick & Me is the most intimate and moving portrait of the world's greatest director.
Categories: book reviews, Stanley Kubrick
continued...