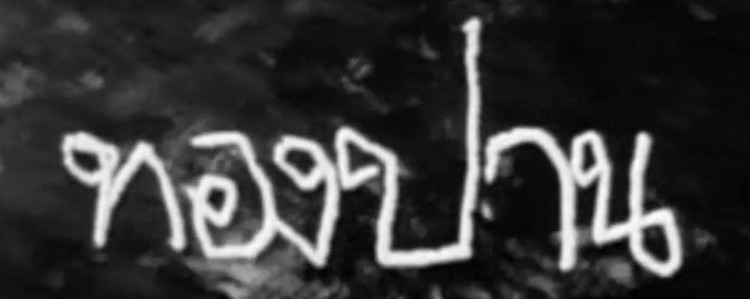 There will be a free screening of Tongpan on 3rd June at the Thai Film Archive in Salaya, near Bangkok. Tongpan (1977) is a dramatisation of a seminar that took place in 1975, which was organised in order to debate the construction of the Pa Mong dam on the Mekong river. The film's eponymous central character is a farmer who had been displaced due to a previous dam.

Sulak Sivaraksa (author of ค่อนศตวรรษ ประชาธิปไตยไทย, Rediscovering Spiritual Value, and Love Letters To Dictators) also appears, and makes a passionate speech against the proposed dam: "Development only serves a few people in Bangkok. Do we see the disadvantages of electricity? Electricity brings radios and TVs that tell people to buy things. The Japanese and the farang industries just get richer. And what about the destruction of our country? The whole province of Loei will be flooded by this Pa Mong Dam."

The Pa Mong dam project was abandoned, though environmental threats to the Mekong region continue to this day. China has built six hydroelectric Mekong dams and more are currently under construction. (Apichatpong Weerasethakul has made several recent films in the region, including Mekong Hotel, Cactus River, Uncle Boonmee Who Can Recall His Past Lives, A Letter To Uncle Boonmee, Phantoms Of Nabua, Cemetery Of Splendor, and his Primitive installation.)

Tongpan was banned in Thailand during the anti-Communist purge of the 1970s, and the film's epilogue explains the repressive political conditions of the period: "In October 1976, shortly after the shooting of this film, a violent coup d'etat of a magnitude never before seen in Thailand brought to an end Thailand's three-year experiment with parliamentary democracy."
Categories: censorship, film reviews, film screenings, Thailand
continued...