"There is no public interest...in publishing kiss-and-tell stories" 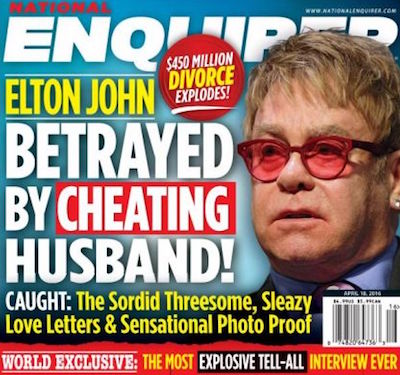 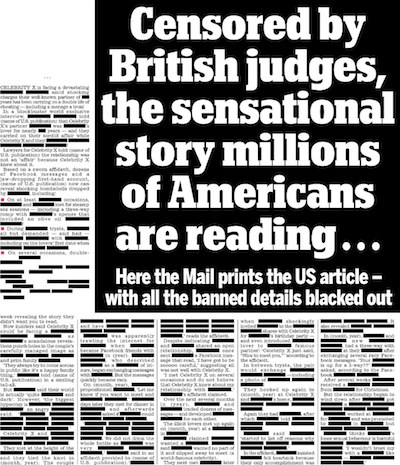 In January, David Furnish applied to the High Court for an injunction against an article The Sun On Sunday newspaper was planning to publish about his extra-marital affair. The High Court initially rejected the injunction, on the grounds that publication would expose the inaccurate image of marital commitment that Furnish and his husband, Elton John, had promoted in their media interviews. Furnish appealed this decision, and the Court of Appeal granted an injunction on the basis that publication would invade his privacy, and that of his children.

The injunction, which is still in force, only applies in England and Wales. Furnish has been named by three American magazines (the National Enquirer, the Star, and OK!, all owned by the same publisher), and newspapers in Scotland, Canada, New Zealand Singapore, Italy, and Belgium. The Enquirer's cover story appeared in its issue published on 6th April (though dated 18th April). The Star's article was published on the same day (and also dated 18th April). OK!'s article appeared in its issue dated 2nd May. The story appeared in the Sunday Mail in Scotland on 10th April, the Toronto Star in Canada on 12th April, the Herald On Sunday in New Zealand on 24th April, Corriere Della Sera in Italy and The Straits Times in Singapore on 21st May, and the Gazet Van Antwerpen in Belgium today.

The National Enquirer, the archetypal supermarket tabloid, reported the scandal in typically lurid fashion. It claimed that Furnish's "sordid affair" with Daniel Laurence had caused "a devastating marriage crisis"; with characteristic hyperbole, it described its four-page kiss-and-tell interview as a "jaw-dropping" story containing "shocking bombshells". The Enquirer revealed further "sickening details of what happened" in its issue dated 25th April (though published on 13th April). (In America, celebrity gossip is protected by the constitution; even if a story is untrue, proof of 'actual malice' is required for a successful libel action.)

The Star's two-page article, headlined "Elton's CHEATING HUSBAND!", was slightly less sensationalist. Unlike the Enquirer, it referred to the Court of Appeal injunction: "The sordid story has come to light only after Elton filed suit to prevent a British newspaper from reporting it. Unfortunately for the knighted rocker, the injunction in the U.K. does not apply in the U.S." OK! had the same headline as the Star ("ELTON'S CHEATING HUSBAND!"), and even used the same main picture. In fact, although OK! claimed that its two-page story was "a bombshell report you'll only read here", its article was largely a reprint of the Star's, with only occasional minor changes.

In Scotland, the Sunday Mail announced on its front page: "Elton John and his husband David Furnish are the A-list couple behind a court injunction silencing the press in England, we reveal today." In an editorial, the newspaper justified the decision by arguing that it named them simply because it could: "we are publishing the identities of Elton John and David Furnish today because there is no good reason not to. Because there is no legal reason not to publish in Scotland what has been banned in England and Wales."

A fortnight later, New Zealand's Herald On Sunday also named the couple, in an article on page eleven headlined "Celebs, threesomes and ridiculous privacy laws". The Herald wrote: "The law does not apply here so the Herald on Sunday can tell you the man involved is David Furnish". The paper also noted the "Streisand effect", named after Barbra Streisand, whereby injunctions and censorship draw attention to the material in question and thus have a counter-productive effect.

Canada's Toronto Star reported the injunction in a story headlined "Tabloids in a tizzy over court ban". The article, on page two, began: "British tabloids won't let the sun go down on a sordid sex story seemingly involving Elton John's Toronto-born husband David Furnish, despite a controversial court ruling." Interestingly, while the other newspapers have named Furnish only in print, the Toronto Star has published its article both in print and online. (The three American magazines have geo-blocked their websites outside America.)

Meanwhile, English newspapers, magazines, and broadcasters are still legally prevented from publishing the names of the couple, or any information that might lead to their identities being revealed. Thus, they cannot even print the titles of the publications that named them. Furnish can only be referred to as "PJS", the random code assigned to him in the injunction; John's code is "YMA". On 8th April, the Daily Mail printed the National Enquirer's original article, with occasional paraphrasing and extensive redactions, to highlight the restrictions imposed on it.

The situation recalls the case of Ryan Giggs in 2011, when he took out an injunction to prevent the news of his affair with Imogen Thomas from being made public. As in the Furnish case, the injunction only applied to English and Welsh media, and Giggs was named by the Scottish newspaper the Sunday Herald on 22nd May 2011. The following day, MP John Hemming used parliamentary privilege to name Giggs in the House of Commons. This opened the floodgates, and the next day's newspapers all named Giggs despite the injunction.

In another case from that year, actor David Threlfall sought an injunction to prevent the News Of The World from revealing his affair with his co-star Pauline McLynn. The injunction was granted, and Threlfall and McLynn were identified only as ETK and X, respectively. However, they were named on the front page of the Sunday World newspaper in Ireland on 5th June 2011. On 4th March 2012, the same newspaper referred to the story again: "Pauline was last year named in British court documents as being accused of having an affair with Shameless star David Threlfall while in the show." No other publications have since named the actors, and the injunction remains in force.

In the case of PJS and YMA, the injunction is also unlikely to be lifted in the foreseeable future. The Sun On Sunday appealed against it last month, and it was lifted on the grounds that Furnish had already been named by the Enquirer and other publications, though reporting was still restricted pending a further appeal by Furnish to the Supreme Court. His appeal was heard three days later, on 21st April, though no decision was made. The Supreme Court finally announced its judgement almost a month later, on 19th May, when it granted Furnish's appeal and upheld the injunction.

The Supreme Court's conclusion rested on the issue of privacy, and set a new precedent: "There is no public interest, however much it may be of interest to some members of the public, in publishing kiss-and-tell stories or criticisms of private sexual conduct, simply because the persons involved are well-known, and so there is no right to invade privacy by publishing them." The case will now go to trial some time later this year.