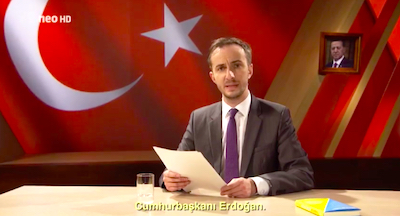 The Turkish government has registered a formal complaint against German comedian Jan Boehmermann, accusing him of insulting Turkish President Recep Tayyip Erdoğan. On his late-night satirical programme Neo Magazin Royale, broadcast on 31st March by ZDF Neo, Boehmermann recited a poem (with Turkish subtitles) mocking Erdoğan, as a demonstration of the limits of freedom of expression.

Boehmermann's poem was gratuitously offensive, though it was clearly intended to be comical rather than libellous. Boehmermann read it in response to the controversy surrounding the song Erdowie, Erdowo, Erdoğan, broadcast by NDR on 17th March. The song, from the comedy show Extra 3, also criticised Erdoğan, and the German ambassador to Turkey was summoned by the Turkish government to apologise for it.

The video of Boehmermann's poem has been removed from ZDF's website, and the broadcaster has also identified and deleted all copies of it from YouTube. The German Chancellor, Angela Merkel, telephoned Turkish PM Ahmet Davutoglu to apologise, and German prosecutors are investigating Boehmermann for the crime of insulting a foreign leader.

Ironically, Erdoğan himself was imprisoned in 1999 for reciting a poem. In a 1997 speech, he had quoted lines from a poem by Ziya Gokalp: "The mosques are our barracks, the domes our helmets, the minarets our bayonets, and the believers our soldiers." He was sentenced to ten months in jail as a result.

Erdoğan is notoriously intolerant of criticism and satire. He filed lawsuits against cartoonists from Cumhuriyet in 2004 and Penguen in 2005, against Cumhuriyet again in 2014, and against Penguen again last year. Artist Matthew Dickinson was charged with insulting Erdoğan in 2006, and charged again soon afterwards. Last year, Nokta magazine was shut down due to a Photoshopped image of Erdoğan. (In 2008, Cumhuriyet was charged with defamation due to two caricatures of Erdoğan's predecessor, Abdullah Gul.)