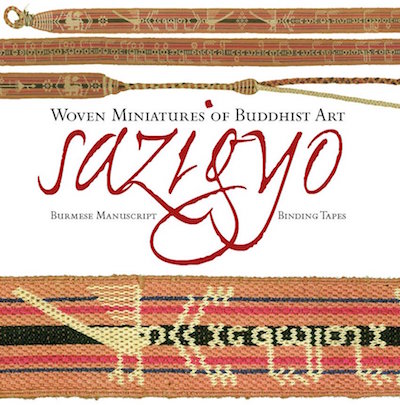 Sazigyo: Burmese Manuscript Binding Tapes - Woven Miniatures Of Buddhist Art, by Ralph Isaacs, is the first book on the art and craft of sazigyo, decorative cotton tapes made by Burmese weavers. As Isaacs says in his preface, his scope is as narrow as the tapes themselves: "This book aims to introduce art lovers and textile enthusiasts to a little-known but fascinating textile art form."

Sazigyo are functional objects, used to tie Buddhist manuscripts into bundles, though they are also textual and visual artworks: "Sazigyo are much more than a length of narrow cotton tape: their woven messages and pictorial symbols carry a wealth of information about Burmese Buddhist beliefs and practice". Almost 1,000 colour images of sazigyo are included (reproduced either at 1:1 scale or enlarged) and there is even an authentic sazigyo bookmark instead of a standard ribbon.

The book is divided into five sections. Part one is mostly superfluous, giving general background on Burmese culture and Buddhism (a "brief introduction, inevitably oversimplified"). After an explanation of the craft of sazigyo in part two, parts three and four provide a unique and detailed study of sazigyo texts and imagery. According to Isaacs, "The miniature pictorial images have instant appeal and are perhaps the chief charm of the sazigyo." His taxonomy and interpretation of sazigyo pictures are fascinating. (Part five is a guide to sazigyo weaving techniques by Peter Collingwood.)
Categories: book reviews
continued...