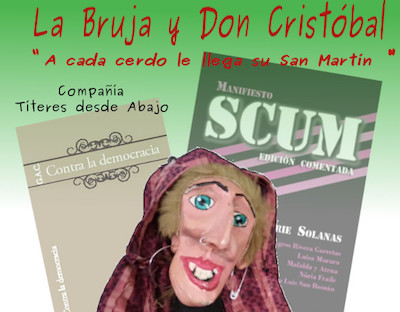 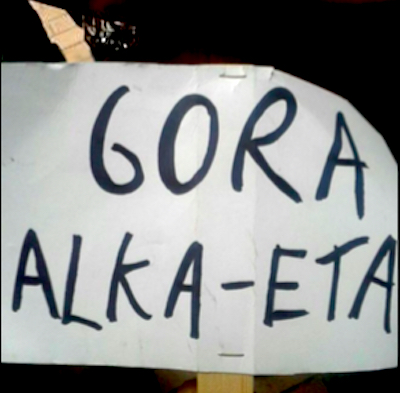 Alfonso Lazaro de la Torre and Raul Garcia Perez, two members of the Titeres desde Abajo puppet theatre company, were arrested in Madrid on Friday and charged with promoting terrorism. They had been performing their play La Bruja & Don Cristobal as part of a Madrid street festival, though some members of the audience complained to police that the play was offensive.

The play was certainly violent (featuring, amongst other things, a nun being raped and then stabbed with a crucifix), though the puppets and their actions were not portrayed with any sense of realism. Also, the play's provocative nature is evident from the poster promoting it, which includes images of the violent SCUM Manifesto by Valerie Solanas and the anti-democratic GAC's book Contra La Democracia.

The puppeteers were arrested because the play also included a hand-held sign reading "GORA ALKA-ETA", an apparent reference not only to the Basque separatists ETA but also to the Islamic terrorists Al Quaeda. If convicted, they face up to four years in jail.
Categories: censorship, politics
continued...