Eames: The Architect & The Painter 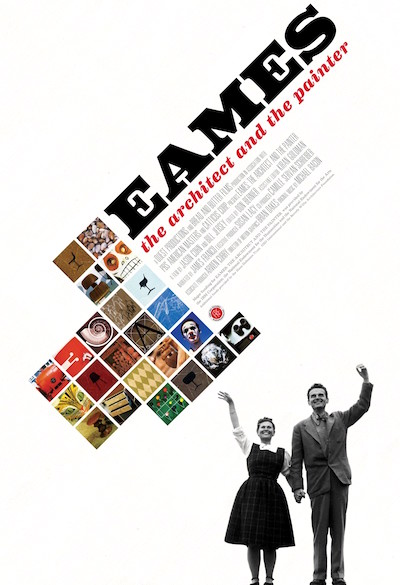 Jason Cohn and Bill Jersey's feature-length documentary Eames: The Architect & The Painter explores the life and work of Charles (the architect) and Ray Eames (the painter). The Eames' collaborative designs "did more to change the public perception of Modern design than just about anyone else in the 20th century" (Charlotte and Peter Fiell, Industrial Design A-Z).

The documentary begins with the development of arguably the most influential Eames design, the plywood LCW chair (part of the Essential Eames exhibition at TCDC last year). This is the only item of furniture or product design that the film discusses in detail, though, as the focus shifts to the dynamics of the Eames' relationship and the working practices in their design office.

Numerous sequences from the Eames' short films are included, notably their most famous film, Powers Of Ten (1977). There are also clips from multi-screen installations such as the seven-screen Glimpses Of The USA (1959) and Think (1964), shown on twenty-two screens at the World's Fair in New York.

Interviewees include Pat Kirkham (author of Charles & Ray Eames: Designers Of The 20th Century, and co-editor of History Of Design), and John and Marilyn Neuhart (co-authors, with Ray Eames, of Eames Design, an objective catalogue raisonne described by Ray as "a book without adjectives"). Charles Eames' daughter (Lucia) and grandson (Eames Demetrios, author of An Eames Primer) also appear.

Eames Demetrios takes us on a tour of the Eames' house, and this archetypal Mid-Century Modern property reflects the different personalities of Charle and Ray Eames. The house has Modernist architecture (open-plan exterior, high ceilings, and glass walls) designed by Charles, and is filled with art and knick-knacks collected by Ray.

Though the Eames Office co-operated with the documentary, this is not a rose-tinted portrait of the designers. For example, art historian Judith Wechsler describes her affair with Charles Eames: "We had a very profound love for each other. He wanted very much for us to get married and have a child, and he wanted to close the Eames office".

On a lighter note, architect Kevin Roche describes dinner at the Eames' house: "what they had arranged for dessert was three bowls of flowers, that they put in front of you to admire, so it was a visual dessert. I was really fucked off with that, I can tell you! I hadn't eaten much, I was saving up for the dessert. So I'm looking at these stupid flowers, saying 'What the hell's wrong with these people?' I got in my car and I drove out to the nearest Dairy Queen!"

Eames: The Architect & The Painter was made for the PBS American Masters television series and first broadcast on 19th December 2011. It was also released theatrically.
Categories: film reviews, media
continued...