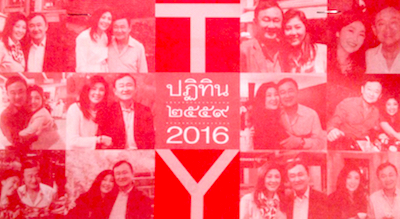 Calendars featuring photographs of Thaksin Shinawatra and his sister Yingluck were banned last month by the governor of Roi Et, a province in northern Thailand. There have been similar reports in other areas of the country, and police prevented Yingluck herself from distributing ten of the calendars in Khon Kean, another northern province.

The calendars, available in two different versions, both feature the message "สวัสดีปีใหม่ 2559" ("happy new year"; 2559 is the Buddhist equivalent of 2016), above short handwritten notes from Thaksin and Yingluck. Former prime ministers Thaksin and Yingluck were both removed from power by military coups (in 2006 and 2014 respectively).
Categories: censorship, politics, Thailand, Thaksin Shinawatra, Yingluck Shinawatra
continued...