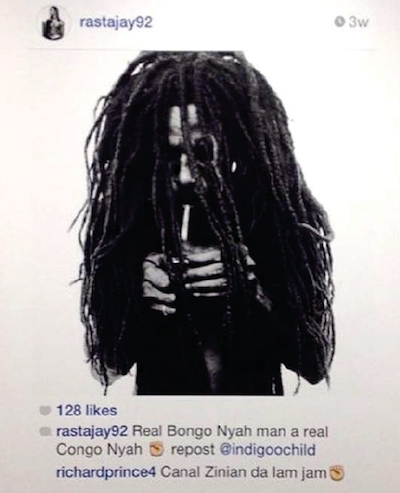 New Portraits consisted of enlargements of Instagram screenshots featuring photographs posted by Instagram users with additional comments by Prince. Prince did not contact the Instagram users prior to his exhibition, and did not seek permission to reproduce their images.

Graham's photograph, slightly cropped to conform to Instagram's square frame, was posted on Instagram by Jay Kirton. Kirton's post was enlarged by Prince and exhibited at the Gagosian Gallery in New York from 12th June to 15th August 2015.

This is not the first lawsuit resulting from Prince's technique of appropriating existing photographs. In 2009, he was sued by another photographer, Patrick Cariou, who claimed that Prince's Canal Zone exhibition had infringed his copyright by incorporating images from his book Yes, Rasta. That case was eventually settled out of court in 2014. Prince's Spiritual America, his appropriation of a photograph by Gary Gross, caused controversy when it was censored from the Pop Life exhibition and catalogue in 2009.
Categories: art exhibitions, censorship
continued...