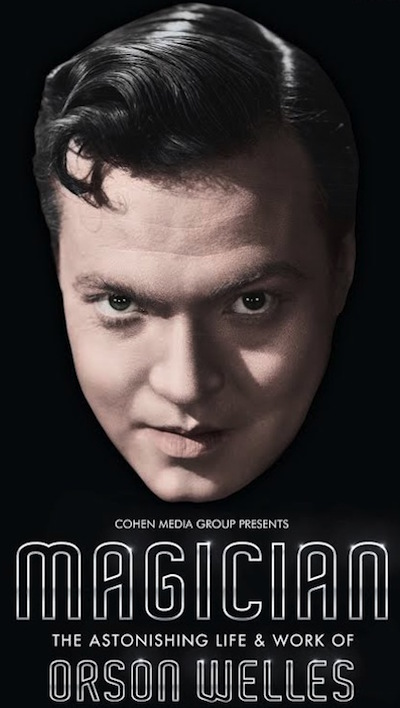 Welles wrote and directed Citizen Kane, probably the greatest film ever made. His other films include The Magnificent Ambersons, The Stranger, The Lady From Shanghai, Touch Of Evil, F For Fake, several other features and shorts, and numerous incomplete films and scripts. (Extracts from the unfinished films are included in Orson Welles: The One-Man Band.)

Welles was also a film and stage actor, and one of the most innovative theatre and radio producers of the last century. He wrote newspaper columns and political speeches, directed television documentaries, and even edited and illustrated editions of Shakespeare's plays. But as Magician is only ninety minutes long, there's not enough time for it to cover any of these achievements in much depth.

Magician features interviews with Welles scholars including Joseph McBride (author of Orson Welles), Jonathan Rosenbaum (author of Discovering Orson Welles), Henry Jaglom (author of My Lunches With Orson), and Peter Bogdanovich (author of This Is Orson Welles, edited by Rosenbaum). It also includes contributions from Welles's daughters Beatrice and Christopher, and his long-term partner, Oja Kodar.

Most of Welles's biographical details are provided by Welles himself in clips from his TV interviews, especially the two-part Arena profile The Orson Welles Story (BBC2, 1982). Welles was an excellent raconteur, but his stories were often heavily embellished, so it's a shame that Magician relies on them unquestioningly. Only once is a Welles story challenged - his account of how he asked for a fee to adapt a random book that he picked up - though only a technicality is queried (his $47,000 or $55,000 fee), when it might be more appropriate to question the entire anecdote. (The book, which became The Lady From Shanghai, was actually optioned by William Castle, who sent it to Welles.)
Categories: film reviews, Orson Welles
continued...