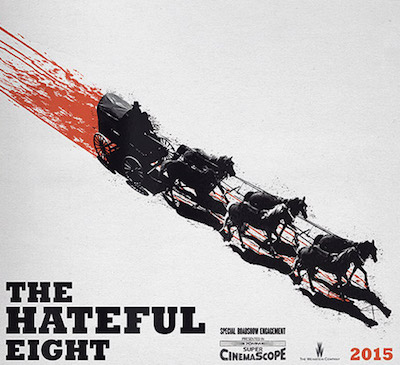 The Hateful Eight is Quentin Tarantino's eighth film. I know that not only because I've seen the previous seven (Reservoir Dogs, Pulp Fiction, Jackie Brown, Kill Bill, Death Proof, Inglourious Basterds, and Django Unchained) but because the opening titles announce it as "the 8th film by Quentin Tarantino".

The 'hateful eight' (clearly the antithesis of The Magnificent Seven) are all heading, for various reasons, to Red Rock, Wyoming, though a blizzard forces them to take shelter at Minnie's Haberdashery. The only woman among them, Daisy Domergue, has a bounty on her head, and almost everyone has secrets and deceptions that are eventually revealed. Some of the backstories remain ambiguous and unresolved, with the audience left to judge what is true or false.

The film is almost three hours long, and divided into six chapters, though the plot doesn't really begin until chapter four. Even after this, the tension doesn't reach the level of the farmhouse and basement tavern sequences in Inglourious Basterds. The first draft of the script (which has a different ending) was leaked online last year, and Tarantino organised a live table-read of that draft in Los Angeles shortly afterwards.

This is essentially a chamber piece, with the action almost completely confined to a single location - the interior of Minnie's Haberdashery - just as Reservoir Dogs took place largely in a warehouse. (It's also reminiscent of two Humphrey Bogart films: The Petrified Forest and Key Largo.) The flashback reveals a shift in point-of-view, as in Pulp Fiction's diner-robbery scenes and Jackie Brown's shopping-mall sequence.

Like all Tarantino films, The Hateful Eight has its share of violence, with an exploding head being the most graphic example; the violent climax is especially similar to Django Unchained. Also, as in Pulp Fiction, Jackie Brown, and Django Unchained, 'the n-word' is used throughout, despite an early line acknowledging the word's pejorative impact: "don't you know that darkies don't like being called niggers no more? They find it offensive."

The Hateful Eight was filmed with 65mm cameras, and is projected in Ultra Panavision, with an extremely wide 2.76:1 aspect ratio, only a fraction less than Cinerama's 2.77:1. (Ultra Panavision was the widest of the widescreen processes developed in the 1950s as anamorphic alternatives to Cinerama; it was used most notably for Ben-Hur in 1959.) As in early CinemaScope films such as The Robe, the wide frame emphasises the blocking of the actors, which looks simultaneously theatrical and cinematic.

The film has been released in a standard version (which is the one I've seen) and a 70mm roadshow version, which includes an overture, intermission, and several minutes of additional footage: the exact opposite of the grindhouse experience Tarantino recreated with Death Proof. Like Christopher Nolan with Interstellar, he is using The Hateful Eight to highlight the superiority of 70mm distribution.
Categories: film reviews
continued...