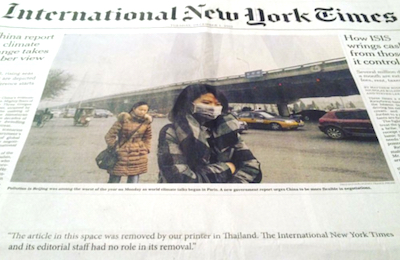 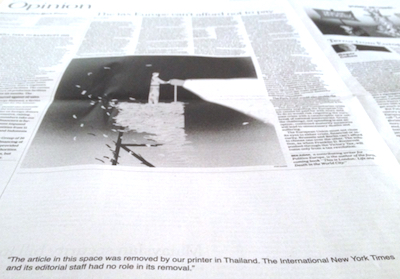 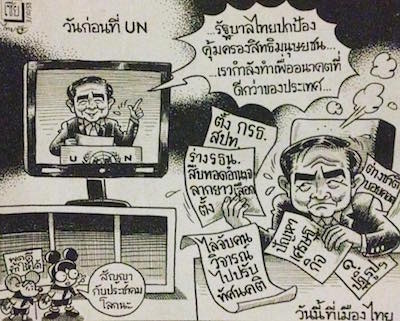 The International New York Times is based in Paris, and its Asian edition is edited in Hong Kong, though it relies on the Eastern Printing Company to print copies for distribution in Thailand. On 22nd September, the company refused to print the newspaper altogether; the newspaper sent a letter to its subscribers explaining that "our locally contracted printer deemed [it] too sensitive to print. This decision was made solely by the printer and is not endorsed by the International New York Times."

On Tuesday, the printer objected to an article headlined "Thai spirits sagging with the economy". The story, by Thomas Fuller, highlighted Thailand's economic downturn following last year's coup. Yesterday's problematic article was an op-ed by Tom Felix Joehnk headlined "The Thai Monarchy and its Money", which called for more transparency regarding the Crown Property Bureau.

The International New York Times announced that it will cease print distribution in Thailand on 31st December. (The Wall Street Journal made a similar decision in September, and has already ceased its Thai distribution.) The market for international newspapers here is small: the International New York Times sells, at most, a few thousand copies per day. (The Bangkok Post, by comparison, sells 30,000 copies daily; the Thai-language tabloid Thai Rath claims a daily circulation of over a million, though this is not certified by the Audit Bureau of Circulation.)

State censorship of the media is rare, as most Thai journalists practice self-censorship to avoid potential 'attitude adjustment' sessions or lèse-majesté charges. However, there have been a few examples of the military government intimidating the media. Pravit Rojanaphruk (a columnist for The Nation) and Thanapol Eawsakul (editor of Same Sky) were both detained for several days last year. Thai Rath cartoonist Sakda Sa-Aeow (known as Sia) was visited by the police who took exception to his 3rd October cartoon portraying Prayut at the UN. MICT asked the Bangkok Post to delete an article from its website on 15th October.

Local censorship of the International New York Times is not unique to Thailand. On 22nd March last year, an article alleging that Pakistan's security services sheltered Osama bin Laden was removed by its Pakistani printer. Also in Pakistan, an article about Charlie Hebdo was censored on 14th January. Most bizarrely, the faces of pigs in two photographs were censored by Malaysian printers on 21st January, as the printer felt that such images would be offensive to Muslims.
Categories: censorship, lese-majeste, media, Thailand
continued...