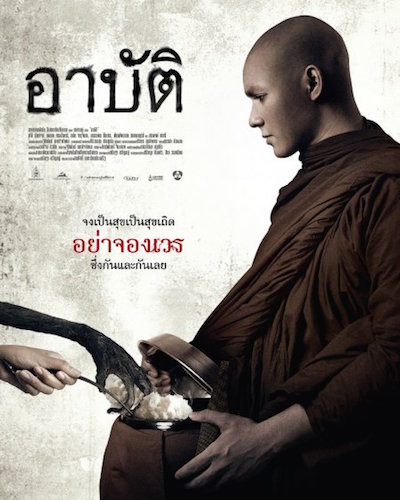 Karma, a horror film directed by Kanittha Kwunyoo, is the latest film to be banned in Thailand. Its theatrical release was scheduled for this Thursday, with a press screening planned for tomorrow, though the Ministry of Culture announced today that the film could not be shown. Five other Thai films are also currently banned: Boundary (banned, then released, then prohibited by the military junta this year), Insects In The Back Yard, This Area Is Under Quarantine, and Shakespeare Must Die.

According to the censors, Karma was banned due to the 'inappropriate' behaviour of its main character, a novice monk: he has a potentially romantic relationship with a girl, and he is depicted drinking alcohol, fighting, and smoking. The censors were particularly concerned about a scene in which a monk rolls a cigarette - as the tobacco could be mistaken for cannabis - and a scene in which a Buddha statue is lifted up by its head.

The censor's over-reaction to such innocuous material recalls the case of Apichatpong Weerasethakul's Syndromes & A Century. Thai censors felt that playing frisbee and guitar were inappropriate activities for a monk, and insisted that these sequences be removed. Apichatpong launched the Free Thai Cinema Movement in response, and eventually released his film with silent leader footage in place of the cut scenes, to highlight the censorship.

Pen-ek Ratanaruang's Headshot was also censored for its depiction of monks, though this time the censorship was more subtle. In one sequence, a hitman dresses in a monk's robe as a disguise, and carries a gun concealed in an alms bowl. For the Thai release, Pen-ek was required to digitally erase the gun from the bowl, as the censors felt that it was inappropriate for a monk to be seen with a gun. Pen-ek told me in an interview that the effect of censoring the gun was counter-productive: showing an empty bowl made the man look more like a real monk, thus his actions seemed even more shocking. (Shadow Of The Naga features similarly contentious scenes, and was shelved for two years before its Thai release; and Parkpoom Wongpoom was required to add a disclaimer to his student film Luang Ta, in which a monk feigns disability to obtain donations.)

Representation of monks has long been a sensitive subject in Thailand. Vasan Sitthiket's painting Buddha Returns To Bangkok (1992) caused protests as it depicts monks raping women, and his ตัวใครตัวมันนะโยม (2011) depicts two monks fighting and having sex. There were also demonstrations in protest at Anupong Chantorn's Perceptless (2007), a painting of monks with beaks. His Hope In The Dark (2009) has a similar theme, and his Moral Boundary (2010) depicts a monk with an erect phallus. Withit Sembutr's Doo Phra, a painting of monks crowding around an amulet-seller, was withdrawn from a Bangkok exhibition in 2007.
Categories: censorship, film reviews, Thailand
continued...