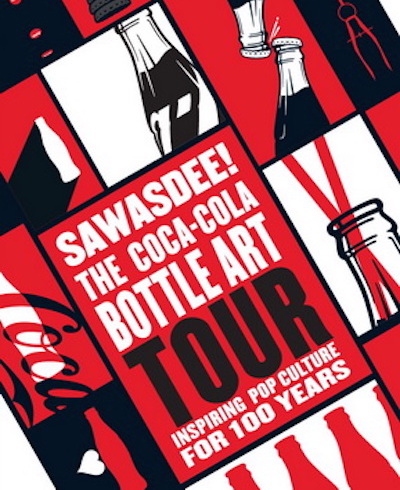 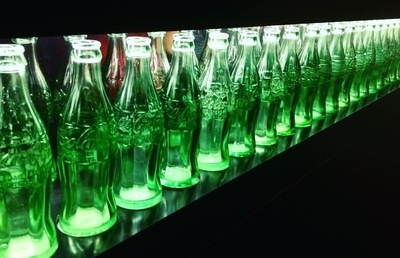 The Coca-Cola Bottle Art Tour, a travelling exhibition celebrating the 100th anniversary of the Coke bottle, arrived at Bangkok's EmQuartier mall yesterday, and runs until 5th November. The exhibition's subtitle, Inspiring Pop Culture For 100 Years, has three different meanings: the brand is part of pop (i.e. popular) culture, Coke is fizzy pop (in the UK), and the bottle was depicted by several Pop artists.

Visitors enter the exhibition in groups of twenty, with a tour guide who gives an introduction in the first room. (He emphasises that a work by the "famous artist Andy Warhol" is included; later, as I'm looking at the Warhol piece, another guide reminds me that it's by "famous artist Andy Warhol".) In the next room, twenty complimentary Coke bottles are arranged on illuminated plinths, one per visitor. Another tour guide then introduces a short video. Then, in the main gallery, visitors can finally explore the rest of the exhibition independently.

The glass bottle, contoured to distinguish it from Coke's competitors, was patented in 1915. It was designed by a team from the Root Glass Company, including Alexander Samuelson and Earl Dean. (The design was inspired by the shape of the coca bean, a 1911 Encyclopaedia Britannica illustration of which is included in the exhibition.) The bottle has since become an icon of packaging design, and is included in Phaidon Design Classics (#109).
Categories: art exhibitions, Thailand
continued...