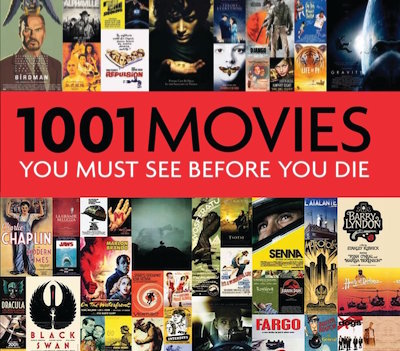 Steven Jay Schneider's 1001 Movies You Must See Before You Die has been updated for 2015. The cover of the hardback edition features a collage of classic film posters, while the paperback version follows the format of recent editions with a still from a new film (Birdman). The tenth anniversary edition was substantially revised, though this year's edition (as in 2005, 2006, 2007, 2008, 2009, 2010, 2011, 2012, and 2014) substitutes only a handful of recent films.

There are ten new entries this year: Ida, Under The Skin, Citizenfour, Leviathan, Boyhood, Birdman, Guardians Of The Galaxy, Whiplash, The Theory Of Everything, and The Grand Budapest Hotel. Therefore, ten films have also been deleted: The Diving Bell & The Butterfly, Gomorrah, The White Ribbon, The Kid With A Bike, Blancanieves, Nebraska, Inside Llewyn Davis, American Hustle, A Touch Of Sin, and (inexplicably) The Tree Of Life.