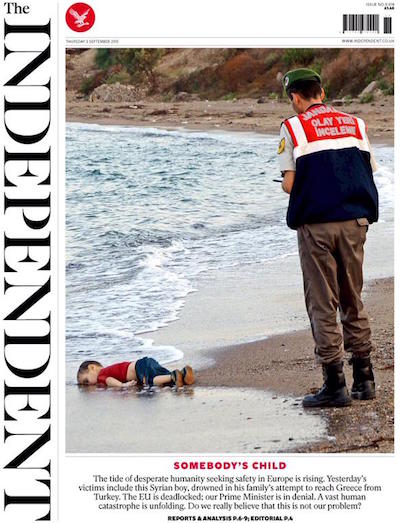 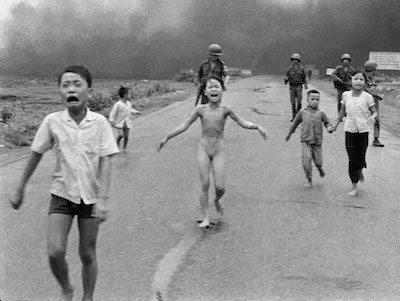 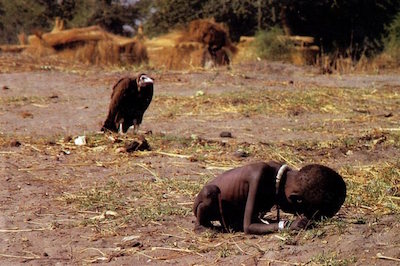 Photographs of Alan Kurdi, a three-year-old boy who drowned in the Mediterranean Sea on 2nd September, have led to overwhelming public support for refugees entering Europe. Kurdi and his family, who were Syrian refugees, were attempting to travel from Turkey to Greece in an inflatable boat. (Due to the Syrian civil war, thousands of refugees have travelled to Europe in overcrowded boats without lifejackets, and many have died in the attempt.)

Kurdi's body was washed up on a Turkish beach, and photographed there by Nilufer Demir. Yesterday, her images of Kurdi appeared on the front pages of every UK national newspaper. While most UK national newspapers used photographs of a policeman carrying the toddler's body away (an image resembling the Pieta), The Independent was the only one to print an even more disturbing image of Kurdi on its front page.

The photograph used by The Independent shows the dead boy lying face-down at the edge of the water, before his body was moved by the police. Some other UK newspapers included this image on their inside pages yesterday, and the Scottish title The National used it on its front page. It appears on the front page of French newspaper Le Monde today.

The images of Kurdi have immediately come to epitomise the desperate plight of refugees seeking asylum in Europe. In this sense, they are as significant as two other distressing photographs of children, both of which won the Pulitzer Prize: Nick Út's picture of Kim Phúc after a napalm attack during the Vietnam War (printed by The New York Times on 9th June 1972), and Kevin Carter's photograph of a vulture following a starving child in Sudan (also printed by The New York Times, on 26th March 1993).
Categories: media
continued...