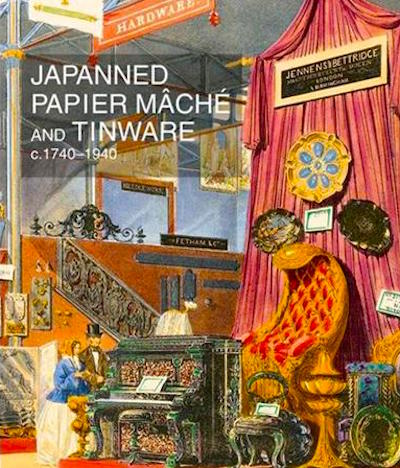 Japanned Papier Mache & Tinware c.1740-1940, by Yvonne Jones, is the first comprehensive study of the 'japanning' industry, a Western imitation of the Japanese lacquerware that was imported into Europe in the seventeenth century. Jones focuses on the English Midlands (which became the epicentre of the japanning trade), though the book also covers japanning elsewhere in the UK, France, Germany, Holland, Austria, Russia, and America.

Japanese lacquer was produced from the sap of trees native to South-East Asia, and Western craftsmen "began a long search to formulate a suitable substitute. Their enquiries show that the meeting of art and science was very characteristic of the time and ran parallel, for example, to the similar search for a European ceramic body that would equal that of Oriental porcelain." (Western ceramicists attempted to replicate the translucence of the kaolin found at Jingdezhen in China.)

The book includes introductory chapters on tinware, papier mache, and the origins of japanning. The main focus is on the manufacturers of japanned items, and the detailed profiles of each company and decorator are unprecedented. Most fascinating are the extensive chapters on the various techniques of japanning decoration and the wide range of japanned products. The bibliography is limited (reflecting the lack of previous literature on the subject), though there are thorough notes and hundreds of beautifully-reproduced colour photographs.