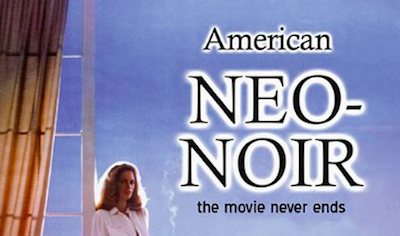 American Neo-Noir: The Movie Never Ends, by Alain Silver and James Ursini, is a survey of the neo-noir sub-genre, from the 1960s onwards. The term 'neo-noir' was first coined by Todd Erickson; he is credited in the acknowledgements, though there are no footnotes or bibliography. Interestingly, although Silver and Ursini classify film noir as a style, they regard neo-noir as a genre: "film noir was never a genre but an American film movement that was defined by style as much as content... neo-noir is more genre than movement, a mimicking of the style and content of the classic period".

More than 500 films are discussed (listed in a comprehensive filmography), though the analysis of each film (even classics such as Chinatown) is limited to one or two paragraphs. Some very recent films are included (even some of this year's releases), and this immediacy may account for some of the typos and errors in the text. Co-writer Alain Silver also designed the book's layout, though he's a much better writer than a designer.

Silver and Ursini's Film Noir: An Encyclopedic Reference To The American Style included an extensive essay on neo-noir, and a truncated version appears in Film Noir: The Encyclopedia. Silver and Ursini have also co-authored Film Noir (edited by Paul Duncan), the Film Noir Reader series, and The Noir Style. They contributed to Film Noir: 100 All-Time Favorites, and recorded DVD commentaries for Call Northside 777, Boomerang!, and Panic In The Streets.
Categories: book reviews
continued...