Design Of The 20th Century 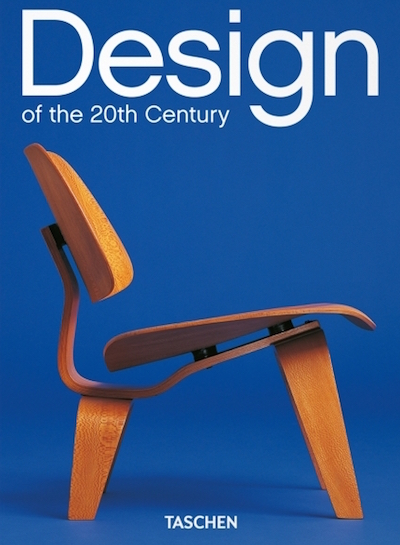 Design Of The 20th Century, by Charlotte and Peter Fiell, was first published by Taschen in 1999. It was reprinted in 2005, and again in 2012, though the changes were minimal: dates were added for the designers who had died since the initial publication. The 2012 reprint has a particularly striking cover: the Eames LCW chair photographed against a plain blue background.

The book is a comprehensive guide to 20th century design, with alphabetical entries covering designers (including Dieter Rams and Charles and Ray Eames), companies (such as Braun and Sony), and design movements (Art Deco, Bauhaus, etc.). There are at least 1,000 illustrations, and all aspects of design are included: products, decorative arts, and graphics. The only drawback is that it hasn't been updated to cover designs of the last few years of the century, such as Jony Ive's Apple iMac.

Charlotte and Peter Fiell also wrote Industrial Design A-Z and The Story Of Design. The Design Encyclopedia, by Mel Byars, is the most comprehensive A-Z design guide, and The Penguin Dictionary of Design & Designers, by Simon Jervis, is also useful. History Of Design, by Pat Kirkham and Susan Weber, surveys the history of design since 1400. History Of Modern Design, by David Raizman, covers design since the Industrial Revolution. The Art Of Things, by Dominique Forest, is a history of product design since 1945. A History Of Industrial Design, by Edward Lucie Smith, is a slightly dated introduction to industrial design. Phaidon has published two visual histories of product design: the three-volume Phaidon Design Classics and the concise The Design Book.
Categories: book reviews
continued...