The World Of Ornament 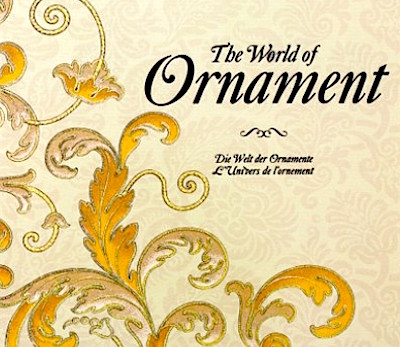 The World Of Ornament is a reprint of two French studies of ornamental designs: L'Ornement Polychrome by Auguste Racinet (published in two volumes between 1869 and 1888) and the less well-known Art Industriel: L'Ornement Des Tissus by M Dupont-Auberville (1877). Both works are early examples of chromolithography, and both were heavily influenced by Owen Jones's classic study The Grammar Of Ornament (1856).

The reprint, published by Taschen, includes a brief introduction by David Batterham discussing encyclopedias of ornamentation. However, Stuart Durant's book Ornament, published twenty years earlier, contains the most authoritative survey and bibliography of ornament encyclopedias. Durant praises L'Ornement Polychrome for "the splendor of its chromolithographic plates", and describes it as "the most extensive published compendium of decoration". Racinet's Le Costume Historique has also been reprinted by Taschen, as The Complete Costume History.
Categories: book reviews
continued...