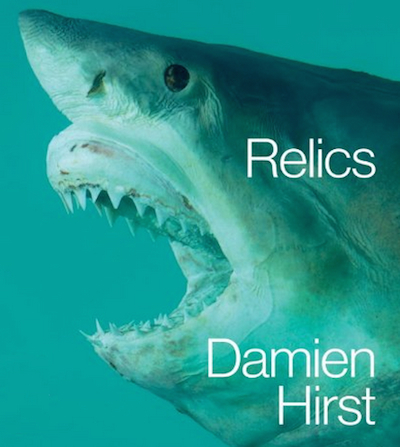 The largest ever retrospective of Damien Hirst's work was held last year, though not in London or New York but in Doha. Relics, curated by Francesco Bonami, was Hirst's first solo exhibition in the Middle East, and was accompanied by a 300-page catalogue published by Skira.

The catalogue begins with an extended essay by curator Francesco Bonami, who discusses Hirst's place in art history: "He is reversing the Picasso paradigm. Everybody knows Picasso, but fewer know his art. Now everybody knows the vitrine with the shark, the butterfly paintings, the Spot paintings, the diamond skulls, the sliced cow and the rotting cow's head, but fewer know their author." There is also a brief essay by Michael Craig-Martin (famous for his conceptual installation An Oak Tree) on Hirst's career prior to the Sensation exhibition, and a Hirst interview by Nicholas Serota (director of the Tate), though these are both reprints from a 2012 Tate catalogue.

Bonami's essay and Serota's interview both emphasise the significance of Hirst's installation A Thousand Years (a self-contained ecosystem, with a cow's head surrounded by flies that hatch and die). Bonami argues: "The paradox is that this work, centered on death and decomposition, is maybe the one that has granted Damien Hirst a slice of immortality in art history." (Arguably, though, the piece is about the life cycle of the flies more than the death of the cow.) In the Serota interview, Hirst says that A Thousand Years is important yet impermanent: "the fly piece was the most exciting thing - still is, possibly - the most exciting piece I made. [But] the fly piece is always something that will need my involvement, need my upkeep - it's high-maintenance."

Relics features many of the signature pieces from Hirst's Natural History series, such as A Thousand Years, Mother & Child (Divided) (a cow and calf, each bisected in vitrines), and Away From The Flock (a sheep preserved in formaldehyde). His iconic diamond-encrusted skull (For The Love Of God) is also included. Arguably Hirst's most famous work, The Physical Impossibility Of Death In The Mind Of Someone Living (his shark in a tank) is missing, though there are three other preserved sharks: The Kingdom, The Immortal, and Leviathan.

The first Hirst retrospective was organised by Charles Saatchi in 2003 (with a catalogue titled Pictures From The Saatchi Gallery), though it was curated without Hirst's approval; one of Hirst's greatest solo exhibitions, Romance In The Age Of Uncertainty, was also held that year. I Want To Spend The Rest Of My Life With Everyone, One To One, Always, Forever, Now (published in 1997) remains the definitive Hirst monograph, though Relics is useful for its updated chronology and bibliography.
Categories: art exhibitions, book reviews
continued...