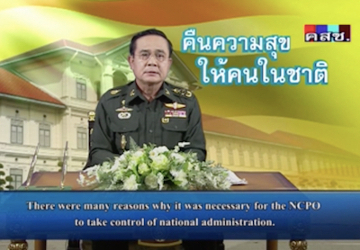 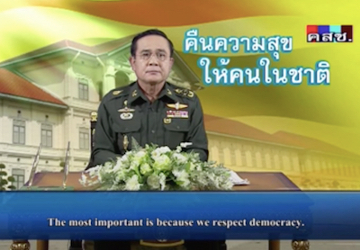 Since the coup, Prayut Chan-ocha has delivered a weekly address each Friday evening, titled คืนความสุข ให้คนในชาติ and broadcast on all channels. Tonight, he began with a remarkable piece of Orwellian doublethink, claiming that his coup was orchestrated in the name of democracy.

In another memorable quote, last year Prayut dismissed criticism surrounding the GT200. Previous quotes of the day: an Election Commissioner agues against an election, hypocrisy from Suthep, a PAD leader says Thailand should be more like North Korea, the ICT Minister openly admits to violating the Computer Crime Act, and a patronising Ministry of Culture official.
Categories: politics, Prayut Chan-o-cha, Thailand
continued...