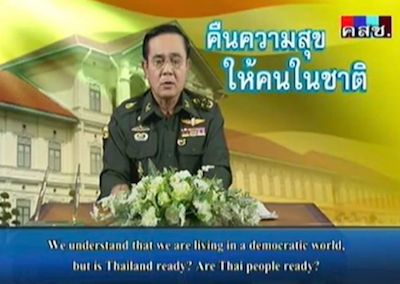 Following last month's coup, the military has begun a PR campaign to promote reconciliation. Army chief Prayut Chan-o-cha is hosting a weekly television address called คืนความสุข ให้คนในชาติ, broadcast on all channels each Friday evening. (He has even written a propaganda song, titled คืนความสุขให้ประเทศไทย, in which he pledges to "bring happiness back to Thailand".)

In his first programme, broadcast last Friday, Prayut devoted most of his speech to a justification of martial law and its various restrictions: "The invocation of martial law, the highest security law, was necessary... We have to strictly enforce the curfew... It was necessary for us to request that certain officials 'report' to the officials... Regarding the prevention of political gatherings of more than five people, this is also necessary... There are reasons why some of the media have to be temporarily suspended." He also outlined his three-step plan for the country's political future: reconciliation, a new constitution (with no mention of a referendum, unlike 2007), and finally an election to be held after a year or more.

In the second programme, broadcast yesterday, Prayut began with a remarkable piece of Orwellian doublethink: "There were many reasons why it was necessary for the NCPO to take control of national administration. The most important is because we respect democracy." Later, however, he reverted to the standard rhetoric of the anti-Thaksin movement: "We understand that we are living in a democratic world, but is Thailand ready? Are Thai people ready?"

Demonstrations against the coup were initially tolerated, though soldiers are now being deployed at likely venues to pre-empt any further protests. Critics of the coup are now using symbolic, less overt tactics, such as a three-finger salute (adopted from The Hunger Games), reading George Orwell's novel 1984, or eating sandwiches, though even these innocuous acts have resulted in arrests. Meanwhile, the military's summonses are continuing, and over 300 people have now reported for questioning and possible detention for up to seven days.
Categories: politics, Prayut Chan-o-cha, Thailand
continued...