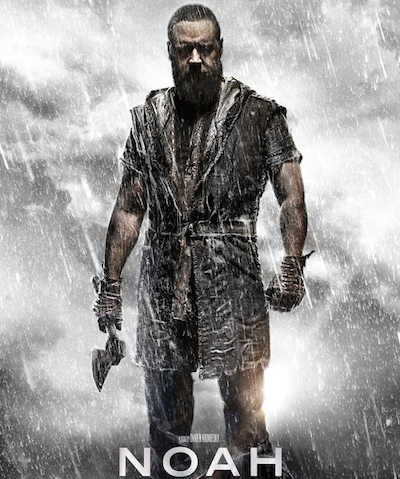 Darren Aronofsky's new film, Noah, stars Russell Crowe as the antediluvian patriarch who built the ark and survived the flood. The Biblical story of the flood is told in less than five pages, though Aronofsky has expanded it into a 138-minute epic. Noah, like The Fountain, opens with a quotation from Genesis. Its budget was more than twice that of all Aronofsky's five previous films (Pi, Requiem For A Dream, The Fountain, Black Swan, and The Wrestler) combined, though Aronofsky is better suited to low-budget indie films rather than bloated studio projects.

With its apocalyptic flood, Noah could have been the ultimate disaster movie, but instead of emphasising the deluge itself, Aronofsky has added new elements in an attempt at dramatic tension. The entire third act, with Noah becoming increasingly deranged after his daughter-in-law's pregnancy, is an un-necessary embellishment. The most bizarre additions are the Warriors, giant rock-creatures who look like leftovers from the Lord Of The Rings.

The film is being released in 2D and IMAX DMR in English-language territories, with some screenings in Dolby Atmos. It has also been retrofitted into 3D and IMAX DMR 3D for foreign-language markets.
Categories: film reviews
continued...