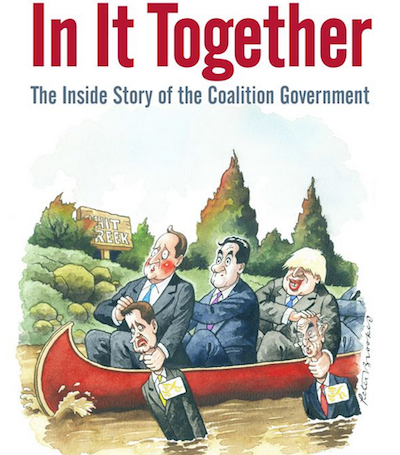 In It Together covers only three years of the government's term of office: David Cameron became Prime Minister in 2010, and his 'coalition agreement' includes a pledge to serve a fixed five-year term. (Servants Of The People similarly covered only the first three years of Tony Blair's premiership; Rawnsley wrote a sequel, The End Of The Party, in 2010.) The coalition still has almost two years left to run, though the (inside) story of its formation and first few years is already substantial enough.

D'Ancona and Rawnsley are both extremely well-connected, though Rawnsley's book benefitted from the extraordinary tensions at the heart of the Labour party in the 1990s. Tony Blair, Gordon Brown, Peter Mandelson, and Alastair Campbell were the dramatis personae of a tragic drama, with Brown as Macbeth. Unfortunately for d'Ancona, the coalition apparently doesn't have the same level of bitter rivalry, thwarted ambition, and back-stabbing as the TB-GB era. George Osborne, who was presumably one of d'Ancona's major sources, is evidently no Gordon Brown. While that makes for a much more co-operative government, it's less compelling in prose.
Categories: book reviews, David Cameron, politics
continued...