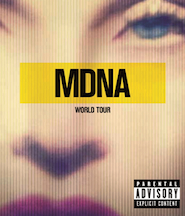 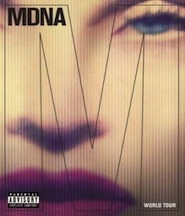 Madonna's MDNA Tour has been released on video and as a double-album, both titled MDNA World Tour. DVD and blu-ray editions both feature the entire concert, filmed last year in Miami, Florida (and broadcast by Epix on 22nd June). For the first time, the live album version also includes the full concert. (Previous live CDs, Sticky & Sweet Tour, The Confessions Tour, and I'm Going To Tell You A Secret, featured only selected highlights.) The album has been released on CD in Europe and Asia - though not in America - and is also available in a dual-format edition (DVD and double CD).