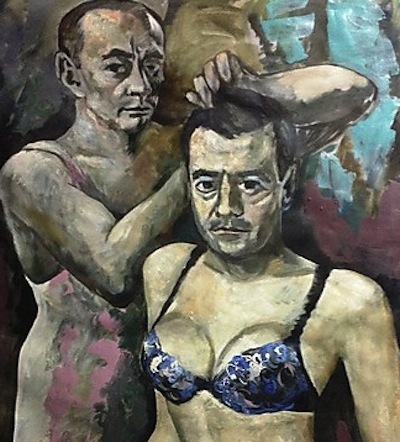 Paintings by Konstantin Altunin were removed by Russian police from a gallery yesterday. The gallery, the Museum of Authority in St Petersburg, has now been closed by the police. The confiscated paintings were part of the gallery's inaugural exhibition, Правители (Leaders), which opened on 15th August.

Four of Altunin's paintings were seized, all of which are satirical portraits of Russian politicians and religious leaders. Радужный Милонов (Rainbow Milonov) is a portrait of Vitaly Milonov surrounded by a rainbow, mocking Milonov's anti-gay legislation. От исповеди (Confession) depicts Patriarch Kirill I with tattoos of Lenin, Stalin, the Virgin Mary, and skulls on his bare chest. The explicit diptych Эротические сны Мизулиной (The Erotic Dreams Of Mizulina) portrays the conservative politician Yelena Mizulina as a contortionist, and shows her performing oral sex. The most provocative work, Травести (Travesty), shows President Vladimir Putin and Prime Minister Dmitry Medvedev wearing lingerie.

Art satirising Putin has been censored on several previous occasions. In 2009, Alexander Shednov was arrested after projecting a collage of Putin wearing a dress, and an abstract painting inciting violence against Putin was banned in 2010.