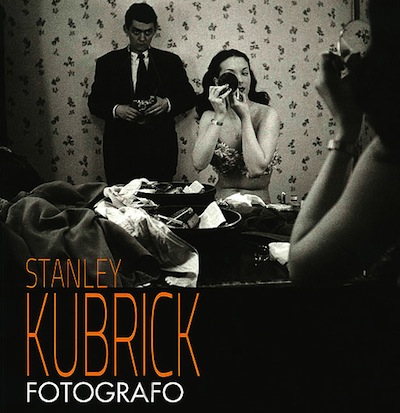 Stanley Kubrick: Fotografo is the catalogue for an exhibition held in Italy last year. There have been three previous exhibitions of Kubrick's photographs - Still Moving Pictures, Fotografie 1945-1950, and Visioni & Finzioni 1945-1950 - all curated by Rainer Crone, thus it's surprising that Crone had no involvement with this latest project. (The catalogue was edited instead by Dario Dondi.)

The range of photographs reproduced in Stanley Kubrick: Fotografo is fortunately wider than in Crone's recent books. The images are less manipulated (the original borders from the contact sheets are all visible, for example), though they are similarly decontextualised (without their original titles or publication dates).

There's an interesting trend relating to the cover photos of this and other recent Kubrick books. Of the seven books about Kubrick's photographs, the first four (Ladro Di Sguardi, Still Moving Pictures, Drama & Shadows, and Fotografie 1945-1950) did not use Kubrick self-portraits on their covers, while the three most recent ones (Visioni & Finzioni, Stanley Kubrick At Look Magazine, and Stanley Kubrick: Fotografo) all do.

Kubrick worked as a photographer for Look for five years, beginning in 1945. His contact sheets can now be found at the Stanley Kubrick Archive, the Museum of the City of New York, and the Library of Congress.
Categories: art exhibitions, book reviews, media, Stanley Kubrick
continued...