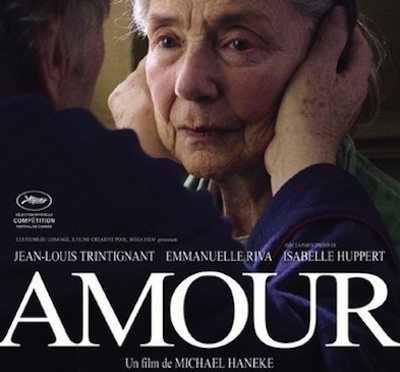 Amour, directed by Michael Haneke, takes place almost entirely within the Paris apartment of retired couple Georges and Anne. (The central characters in most of Haneke's films - Amour, Cache, The Seventh Continent, Benny's Video, Code Unknown, Time Of The Wolf, and Funny Games - are called Georges and Anne, or slight variations of those names.)

In the opening sequence, police break open the door and find Anne's body laid out on her deathbed. The film then shows us the last few weeks of Anne's life, after she suffers a series of debilitating strokes. The practical and emotional realities of coping with terminal illness are slowly revealed, as Georges cares for Anne while her condition inevitably deteriorates.

Georges and Anne are an intellectual, cultured couple, unlike the superficial bourgeois characters Haneke often depicts. They are the opposites of the faux-intellectual couple from Cache, for example: they read books, rather than using them as decorative status symbols. Amour is an emotional and tender film, not Haneke's more familiar 'epater les bourgeois' approach (seen most directly in Funny Games and its American remake).

We first see Georges and Anne in long-shot, in the audience for a piano concert. As in the ambiguous final sequence of Cache, we have to search the frame looking for the protagonists. The rest of the film is a chamber piece, as Georges and Anne deal with the final stages of their long marriage. They are occasionally visited by their daughter, played by Isabelle Huppert, though visits from her and other outsiders feel like intrusions. Huppert also starred in Time Of The Wolf and The Piano Teacher; in Amour, Anne is a retired piano teacher.

The two leading actors, both more than eighty years old, give brave and moving performances. Jean-Louis Trintignant dominates the film, though Emmanuelle Riva (who starred in the New Wave classic Hiroshima Mon Amour) is arguably even more impressive. Her physical vulnerability and emotional intensity are profound.

Amour won the Palme d'Or at Cannes last year (three years after another Haneke film, The White Ribbon). It was screened at the Clap! French Film Festival, and as part of the Bioscope Theatre season.
Categories: film reviews
continued...