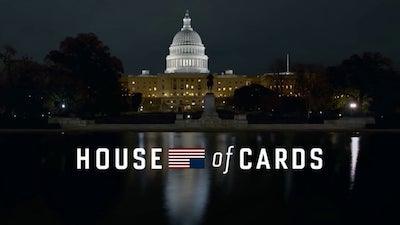 House Of Cards, the Netflix drama series, was inspired by the BBC mini-series of the same name broadcast in 1990. The Netflix version, adapted by Beau Willimon, transposes the setting from Westminster to Washington DC. The central character, Frank Underwood - retaining the FU ('fuck you') initials of the original's Francis Urquhart - is played by Kevin Spacey. Underwood is as Machiavellian as Urquhart, and both characters deliver direct-to-camera asides to the audience; Underwood even repeats Urquhart's most famous line, "I couldn't possibly comment." The first two episodes were directed by David Fincher (director of Seven and Fight Club).

The series is even darker and more gripping than the original, though it's most significant for its distribution model: all thirteen episodes were released simultaneously, available to stream or download either individually or all at once. Viewers could binge-watch multiple episodes, instead of waiting for a weekly broadcast schedule. Netflix streaming now accounts for around a third of all North American internet traffic; House Of Cards marks its first significant move from distribution to original content production, as it transitions (along with competitors such as Amazon) from a technology company to a media company.
Categories: media
continued...