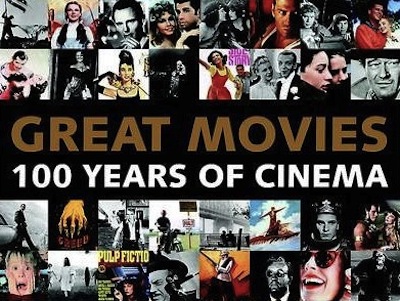 Great Movies: 100 Years Of Cinema, by Andrew Heritage, is a guide to 100 classic films divided into ten genres. The films are listed chronologically within each section. Two pages are devoted to each film; there are plenty of glossy colour photos, though the text does little more than summarise each film's plot.

There is no western category, so High Noon and The Searchers appear in the Action/Adventure section and Once Upon A Time In The West is in the Historical section. Some of the other classifications are also rather odd: Pulp Fiction is listed under Comedy rather than Thriller/Crime, and Dr Strangelove is in the War section rather than the Comedy section. The author admits that the final category, Drama, is "an opportunity, within limited space, to attempt to include any movies that simply didn't fit into the preceding nine genre categories" (hardly an ideal solution).

The book also includes brief articles on significant film movements, such as the French New Wave, documentaries, realism, and underground cinema. However, these should really have been included in the main 100 list instead of being relegated to supplementary sections.

There are a few mistakes regarding technical details: the prologue to The Wizard Of Oz is described as "sepia black and white" (they are two different formats), there is a reference to "Blu-ray Avatar" (Blu-ray is not a theatrical format), a photo of a 35mm camera has a "digital camera" caption, and Inception is used as an example of "digital special effects" (visual effects are digital, special effects are analogue; Inception is notable for its analogue special effects). A famous line from Taxi Driver, "You talkin' to me?", is twice misquoted as "Are you looking at me?".

There is a brief bibliography, though it's rather outdated as it consists almost entirely of annual film guides that are no longer being published (Halliwell's, Time Out, etc.). It even cites the "invaluable Filmgoer's Companion", a book which was superseded long ago by Ephraim Katz's Film Encyclopedia.

The Great Movies are as follows:

ComedyAction/AdventureRomance/MelodramaMusicalsThrillers/CrimeHistoricalWarFamilyFantasy/Sci-Fi/HorrorDrama(Note that Some Like It Hot is the Billy Wilder version rather than the 1939 comedy of the same name. Also, The Ten Commandments is Cecil B de Mille's sound version, not his earlier silent version.)
Categories: book reviews, film lists
continued...